One dead, Dodge Challenger split in half after crashing at 100 MPH

A stolen Dodge Challenger that was going at least 100 MPH crashed and was split in half, killing one person and critically injuring a teenager.

DETROIT (FOX 2) - The Detroit Fire Department and Detroit Police confirm that at least one person is dead after a crash on the city's west side that caused the car to be broken into multiple pieces.

Fire officials said the crash happened around 12:30 p.m. on Thursday at the intersection of Fenkell and Lindsay. According to video from SkyFox, the front half of the car was visible but the other half was resting against a tree and appeared to have caught fire.

According to authorities, the stolen Dodge Challenger was seen speeding in the area and eventually spinning out before it crashed into a tree and split in half.

A passenger in the backseat was killed in the crash, according to both Detroit Police and the Detroit Fire Department. The exact age of the victim is not currently known and has been listed as 14, 17, or possibly in his 20s but police are unsure of his exact age and are still investigating.

The driver, a 16-year-old, is listed in critical condition at the hospital.

According to fire officials, there appears to be only one car involved but authorities are still investigating.

According to police, the Challenger was going more than 100 MPH when it clipped an SUV and spun in circles before crashing into a tree. The backseat passenger was ejected and killed.

Neighbors said this isn't the first time young men have been speeding through the area.

"From Fenkell and Grand River all the way down to Greenfield, they're clocking at 100 miles an hour," said Kevin Jackson. "If any child or anyone steps out there the wrong way..."

Officials initially believed the driver may have been doing donuts but later said that the car spun out after it hit the SUV. 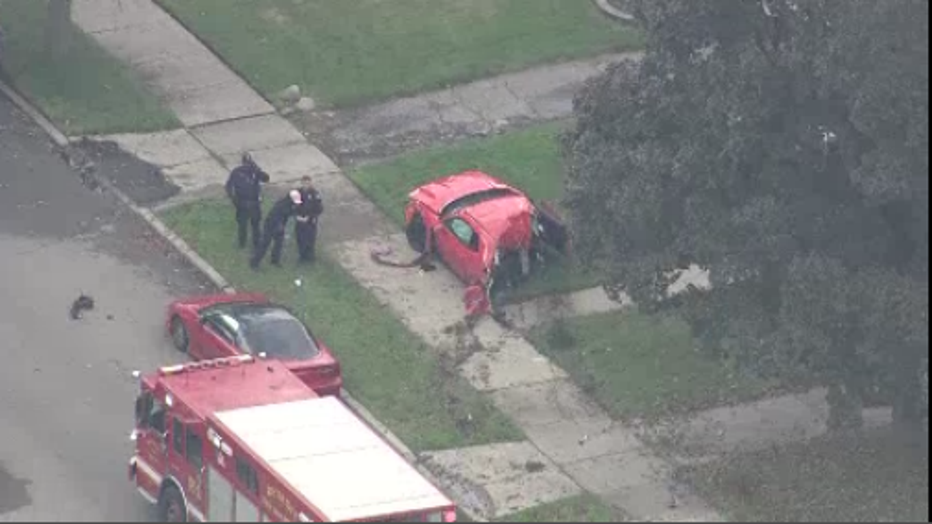 Fire officials said one person was killed in a crash on Detroit's west side.