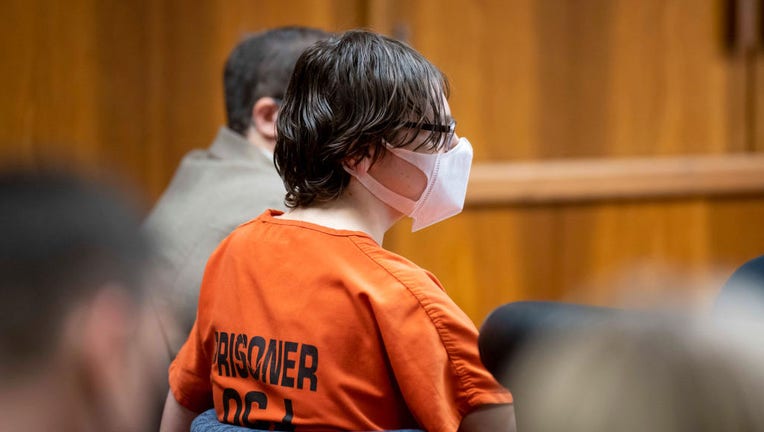 PONTIAC, MICHIGAN - FEBRUARY 22: Ethan Crumbley attends a hearing at Oakland County circuit court on February 22, 2022 in Pontiac, Michigan. . Crumbley, 15, is charged with the fatal shooting of four fellow students and the wounding of seven others,

(FOX 2) - A lawsuit filed on behalf of one of the victim's families of the Oxford School shooting on Nov. 30, 2021 claims the school district and multiple officials displayed "deliberate indifference" to the alleged shooter's mental state, which led to the killings of four students and injuries to several others.

In a filing in the U.S. District Court of Eastern Michigan, Steve St. Juliana, a relative to Hana St. Juliana, it alleges the district's former superintendent, the dean of students, and a student counselor were aware of the suicidal and homicidal ideations of Ethan Crumbley and still exposed others to the danger he possessed.

Additionally, the lawsuit claims the district's administrators have "manufactured a cover story" that justifies the official's actions to release Crumbley back to class after meeting with him the day of the shooting.

It also accuses the district of "developing a false narrative in its efforts to avoid accountability."

"The District has denied knowing that Doe (Crumbley) was suicidal and harboring homicidal ideation. In truth, the District did know that Doe was suicidal and possibly homicidal when he was released from the Counselor’s office," read the filing, which was authored by the Royal Oak law firm Pitt, McGehee, Palmer, Bonanni & Rivers PC.

St. Juliana, 14, was among the four teens that died during the Crumbley's alleged rampage through the high school last year. Crumbley has since been charged with terrorism and murder counts. Tate Myre, 16, Madisyn Baldwin, 17, and Justin Shilling, 17, also died.

While the Oakland County Prosecutor has brought charges toward both Crumbley and his parents, litigation has also been introduced against the school district. Parents of Myre are being represented by Attorney Venn Johnson.

Geoffrey Fieger has also sued the district on behalf of two students, accusing former Superintendent Timothy Throne and others of failing to protect students.

A similar argument is being made in St. Juliana's lawsuit, which argues the district's attempts to justify its actions regarding Crumbley "demonstrates egregious deliberate indifference to the danger presented when a student such as Doe, who the school knew was suicidal and presented a clear threat, is returned to the school environment."

The district's explanation, the lawsuit claims, relies on its "adherence to policy" that unless there was a disciplinary issue, they could not do anything besides return the Crumbley to class.

The alleged teen shooter was seen watching a video depicting a shooting and drawing disturbing images and phrases on a math assignment before he was removed from class. During a meeting with Shawn Hopkins, Crumbley's counselor, he inquired into the teen's mental state and reasons for his drawings.

While testifying during a preliminary hearing in February, Hopkins told a judge he was "was concerned about suicidal ideation" in Ethan, prompting him to summon his parents to the school. After a meeting with James and Jennifer Crumbley, Ethan was sent back to class.

The latest lawsuit argues that Hopkins and Dean Nicholas Ejak escalated the danger the students were in by failing to search Ethan's backpack before sending him back to class.

"The only relevant inquiry for these school officials was: ‘if Doe is released, will the danger to himself or his fellow students in the school be increased?’Whether Doe was a disciplinary case was irrelevant to the question of whether he should or should not be released from a safe zone," read the filing.

Also listed on the lawsuit was Steven Wolf, the Principal of Oxford High School and Ken Weaver, the current superintendent, who is only being sued in his official capacity.