President Joe Biden spoke Friday after America’s employers added just 235,000 jobs in August, a modest gain after two months of robust hiring at a time when the delta variant’s spread has discouraged some people from flying, shopping and eating out.

More than 7 million out-of-work Americans are poised to lose all of their unemployment benefits this week as three federal programs put in place in the early days of the coronavirus pandemic expired on Monday.

In addition to the 7.5 million workers who face the loss of all unemployment benefits on Labor Day, another 3 million stand to lose the extra $300 boost to their state jobless aid, according to a recent report published by the left-leaning Century Foundation.

The lapse of the jobless aid, set up by Congress nearly 18 months ago as the virus forced an unprecedented shutdown of the nation's economy, pushing unemployment to the highest rate since the Great Depression, could precipitate a sharp pullback in spending: The Century Foundation estimated that ending the programs will drain about $5 billion a week from the economy, threatening its slow progress to pre-pandemic levels.

In addition to providing workers with an extra $300 a week on top of their regular state benefits, the programs offered aid to workers who were not typically eligible and extended state unemployment benefits once they had been exhausted. 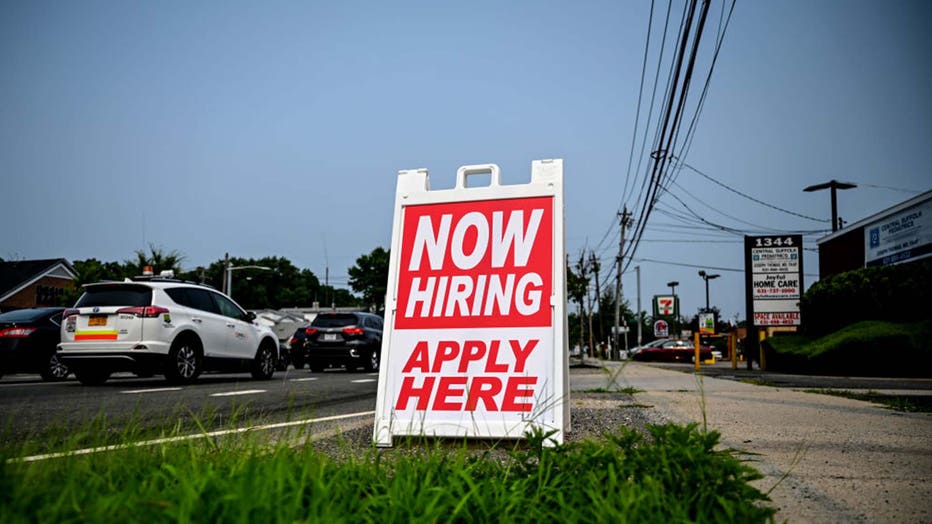 FILE - Photo of a help wanted sign along Middle Country Road in Selden on July 20, 2021.

RELATED: 4 in 10 Americans cried about money during the COVID-19 pandemic: study

But as the economy reopens, companies have complained about a lack of available workers: There are still some 5.5 million unemployed Americans, despite a record 10.1 million open jobs.

Already, 23 states – all but one of which is led by a Republican governor – have ended the unemployment programs, a move intended to help businesses struggling to hire workers. (Although they attempted to terminate the programs, Arkansas, Indiana and Maryland were ordered by state judges to reinstate them.)

Critics argue that other factors, such as a lack of child care, are the reason for lackluster hiring and have said that opting out of the relief program before it's officially slated to end will hurt unemployed Americans, leaving them with no income as they search for a new job.

At the same time, those states saw larger job gains, with their collective employment rising 4.4 percentage points compared to states that continued to participate in the relief programs. However, that represents about one in eight unemployed individuals who were able to find jobs; the remaining seven were not only out of work, but without an income.

Despite some last-minute rumblings from progressives about extending the federal aid programs as part of a massive $3.5 trillion reconciliation bill that Democrats are currently crafting, there appears to be little momentum on Capitol Hill to do so, even with the spread of the highly contagious delta variant.

Such an effort would also most certainly meet opposition from moderate Democrats, many of whom rebelled against extending other coronavirus relief provisions, such as a federal ban on evictions.

In August, the Biden administration signaled the pandemic relief programs would end as planned in September, but encouraged states with high jobless rates to repurpose federal relief money in order to extend the aid.

In a letter addressed to Democratic chairmen in the House and Senate, Treasury Secretary Janet Yellen and Labor Secretary Marty Walsh said that President Biden still believes it's "appropriate" for the three relief programs to end on Labor Day. But they stressed that some states with persistently high unemployment rates should consider continuing the relief programs using the $350 billion in state and local government aid allocated by the American Rescue Plan.

"Even as the economy continues to recover and robust job growth continues, there are some states where it may make sense for unemployed workers to continue receiving additional assistance for a longer period of time, allowing residents of those states more time to find a job in areas where unemployment remains high," they wrote.

That could include blue states such as New Mexico, Connecticut, Nevada, New York and California, where the jobless rate is still above the national average of 5.4%, according to Labor Department data.

The sudden cutoff in aid has reportedly sparked alarm among some Biden aides after a nationwide surge in COVID-19 infections, driven by the highly contagious delta variant, led to a dismal August jobs report. Employers last month added just 235,000 positions, sharply missing expectations for a gain of about 728,000.

"Today's dreadful jobs report -- which basically put the recovery on ice for a while -- is yet another reminder that the virus is the economy. Delta roars and the recovery retreats," Justin Wolfers, an economist at the University of Michigan, said Friday.