PETA suggested that the Punxsutawney Groundhog Club use an animatronic version with artificial intelligence could predict the weather.

PUNXSUTAWNEY, Pa. - PETA is calling for Pennsylvania’s most famous groundhog to retire and be replaced with an animatronic version ahead of Groundhog Day 2020.

The animal rights organization wrote in a letter to the Punxsutawney Groundhog Club that it was time to change the decades-old tradition in which Punxsutawney Phil predicts whether we’ll see an early end to winter.

The top hat-wearing members of the club who handle Phil bring him out and reveal the animal’s forecast every Feb. 2 in the town of Punxsutawney, located about 85 miles northeast of Pittsburgh. The legend says if the furry rodent sees his shadow, there will be six more weeks of winter. If not, spring comes early.

Thousands of people gather for the annual event, which has taken place as far back as the late 1800s. 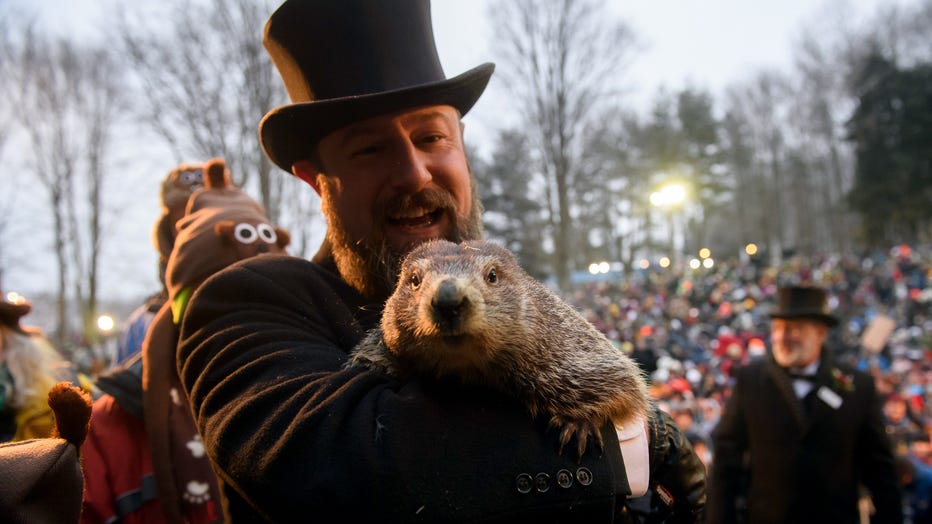 Handler AJ Dereume holds Punxsutawney Phil after he did not see his shadow predicting an early spring during the 133rd annual Groundhog Day festivities on Feb. 2, 2019 in Punxsutawney, Pennsylvania. (Photo by Jeff Swensen/Getty Images)

“When Phil is dragged out of his hole and held up to flashing lights and crowds, he has no idea what’s happening,” PETA President Ingrid Newkirk wrote. “Being relegated to a library ‘habitat’ for the other days of the year doesn’t allow him or the other groundhog there to dig, burrow, or forage. It’s no kind of life for these animals.”

PETA suggested that instead of live animals, the Punxsutawney Groundhog Club use “technologically advanced electromechanical devices such as animatronics” with artificial intelligence could reliably predict the weather.

“An AI Phil would renew interest in Punxsutawney, generating a great deal of buzz, much like Sony’s robot dog ‘aibo,’ which walks, plays, misbehaves, and responds to commands,” Newkirk wrote.

“By creating an AI Phil, you could keep Punxsutawney at the center of Groundhog Day but in a much more progressive way.”

The organization also suggested that the younger generation isn’t as captivated by the Groundhog Day tradition.

“Today’s young people are born into a world of terabytes, and to them, watching a nocturnal rodent being pulled from a fake hole isn’t even worthy of a text message,” the letter reads. “This is a generation whose members book rides on their smart phones and will never walk into a bank to deposit a check. Ignoring the nation’s fast-changing demographics might well prove the end of Groundhog Day.”

The Punxsutawney Groundhog Club did not immediately respond to a request for comment.