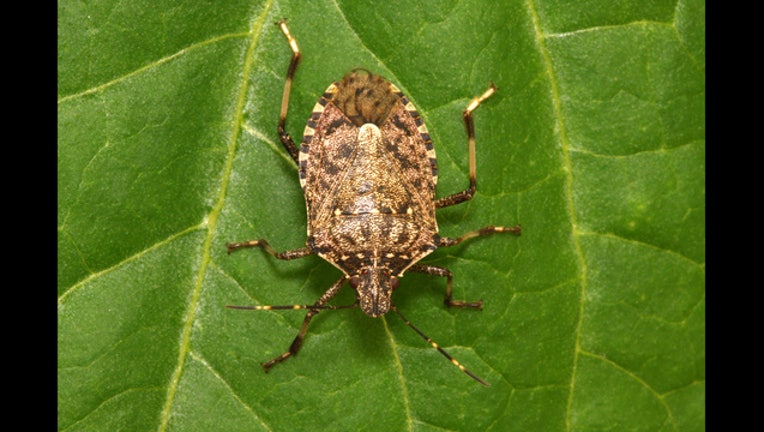 A Brown marmorated stink bug female from a laboratory colony on a common bean leaf, photographed in the laboratory of Fondazione Edmund Mach, Italy. Image via: Yerpo/Wikimedia Commons

(FOX 2) - January's polar vortex may have brought some good news: an expert says the extreme cold may have killed a majority of stink bugs.

After blasts of arctic air researchers at Virginia Tech University found that the extreme cold killed off 95 percent of stinkbugs they were studying back in Jan. 2014, according to the Washington Post. The Post also reported that temperatures in the D.C. area dropped into the single digits; however, questions remained about how much of an impact the cold had on stinkbugs outside those being observed at Virginia Tech University.

The stink bugs live outside during the warm months but as summer turns to fall and then in to winter, the stink bugs are looking for a way to survive. As the outdoor temperatures cool, stink bugs will do like humans - spend time indoors.

Other invasive species, like the emerald ash borer and southern pine beetle, were also unlikely to survive the cold. But here in Michigan, our concern is the stink bug which can and will eat your garden.

While 95 percent of non-shelter finding stink bugs being killed by the extreme cold is a nice number - it's not the whole truth. That's because it doesn't mean 95 percent of the population will be gone.

"Also, even if adult pests freeze, they may have already laid eggs which will hatch when the weather warms," the organization said.

Some insects are able to withstand temperatures well below zero - including cockroaches, bed bugs, ants, and termites - but stink bugs are not one of them. So, unless they've already taken up residence in a hollowed out log, in your attic (sorry but this is very likely), or in some other shelter - there's a good chance they're gone.

The brown marmorated stink bug (BMSB) sucks plant juices from fruits, seed pods and nuts on a wide variety of wild and cultivated plants. What it's really known for is it's very distinct smell when you kill it - it's very pungent and when you smell it, you'll know.

The best way to manage stink bugs to keep them out of the house. Repair broken screens on doors, block access through AC units, chimneys, and vents to the outside, fill gaps around air conditioners, utility interfaces, or other cracks using caulk or foam sealant.

If they get in and you want to kill them without the stink or stain, that's easy too. Get a shop vac and suck them up. You can also catch them or drop them into soapy water or get really innovative and put a pan of soapy water under a light. Leave the light on and the stink bugs will flock to the light and eventually fall into the pan and drown.

Information from the Associated Press and FOX News was used in this report.