SHELBY TWP., Mich. (FOX 2) - A Macomb Township man and his 12-year-old daughter were killed in a crash at Van Dyke and 21 Mile in Shelby Township Tuesday night. A second child inside, remains hospitalized.

First responders and Good Samaritans who jumped into action after a truck crash in Shelby Township are devastated. All they can think about is this mangled pick-up truck and the family inside.

First responders and Good Samaritans who jumped into action after a truck crash in Shelby Township are devastated. All they can think about is this mangled pick-up truck and the family inside.

Hartley heard the crash Tuesday night. police say a commercial tree trimming truck was going south on Van Dyke when a Dodge Ram going north tried to turn left onto 21 Mile Road. The trucks smashed into each other.

A 45-year-old dad and his 12-year-old twins were inside the pickup. Hartley and others ran over to help.

"You could see the flames underneath and then all of a sudden there were four men who ran out to the truck and they were pulling the kids out and they pulled the kids out first," she said.

"I commend those witnesses for stopping and putting themselves in harm's way," said Sgt. Mark Benedettini, Shelby Twp. police. "We did everything we could between police and the fire department and those witnesses, to give that family the best chance that they could."

Police say the dad and his daughter were pronounced dead at a hospital. The son is stable in serious condition. So far investigators don't believe alcohol, drugs or weather were factors. 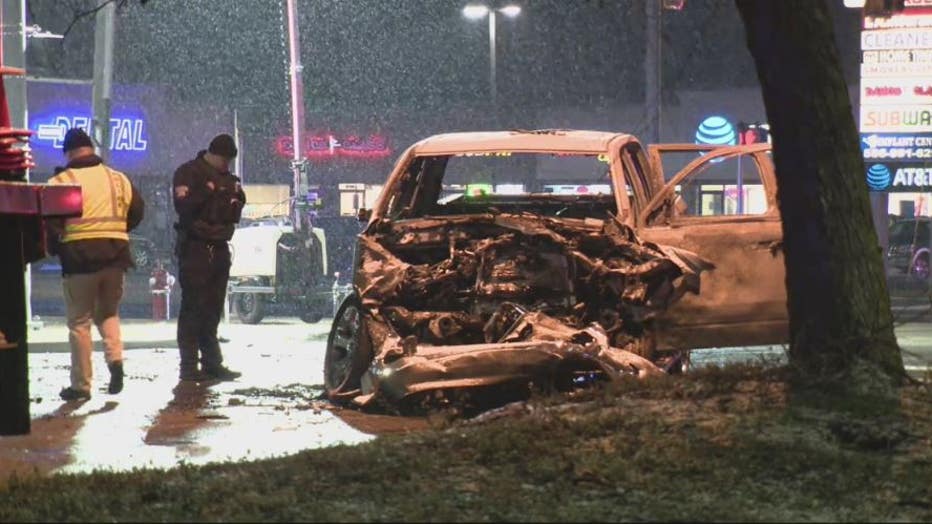 "One of the vehicles we suspect disregarded a red light, we are still trying in our investigation to determine which vehicle ran the red light," Benedettini said.

The driver of the tree trimming truck and a passenger are okay. Now police are figuring out how fast the trucks were going and if anyone was texting and driving. Meanwhile, people here are thinking about the loved ones a family lost.

"Our thoughts and prayers are definitely with the family at this point," said Benedettini. "Very tough scene for the officers, the firefighters and the family. I can’t even imagine what they’re going through."