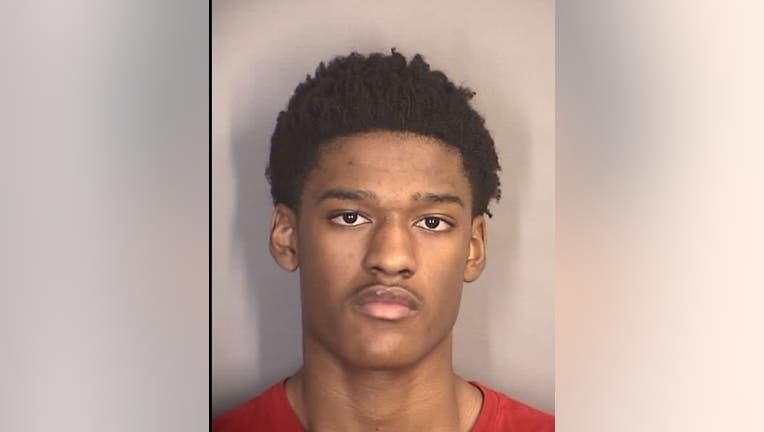 A photo of the suspect, Damon Terrelle, 17, of Detroit, who's wanted in connection with a deadly shooting near Erebus Haunted House in Pontiac.

PONTIAC, Mich. (FOX 2) - A suspect has been identified in connection with the fatal shooting near Erebus Haunted House in Pontiac.

The Oakland County Sheriff's Office says they're looking for 17-year-old Damon Terrelle, who's a Detroit resident. Terrelle is wanted for first-degree murder and weapons charges stemming from a shooting that happened outside the attraction last weekend.

The victim was Douglas Reese, a 29-year-old man from Detroit, who was shot multiple times in the side, neck and chest.

The Oakland County Sheriff's Office says the situation started in the line to get inside Erebus when Reese and the suspect got into an argument. Reese got out of line and was walking to his car when the sheriff said the suspect followed him and started shooting.

While no one is disputing the shooting, family members and law enforcement are still confused about what led up to the shooting. Witnesses said Reese cut in line front of the suspect but his family says that's not true.

"We've actually heard six different stories, six different versions of what actually happened. We don't know what is the true story," Reese's cousin, who did not wish to be identified, said. "He wasn't the type of person to take cuts in front of nobody, he was not confrontational, he didn't just look for trouble or anything like that."

The sheriff's office released images of the suspect in line and of the car he left in. Now they've also released his name.

If anyone has any information related to the whereabouts of Terrelle, call Crime Stoppers immediately at (800) SPEAK-UP. A  $2,000 reward is being offered for information and you will remain anonymous.

He is considered to be armed and dangerous.