FOX NEWS - One funny mom in Wisconsin ensured that her third child would be welcomed into the world with guns blazing by bringing a toy Nerf gun to the hospital so that her husband wouldn’t accidentally fall asleep when his help is needed.

As explained in a Facebook post that has since gone viral with over 16,000 shares and more than 8,500 comments, Samantha Mravik-Miller packed a little something special in her hospital bag before giving birth in December. The woman told Fox News she was inspired to bring the toy weapon as a joke to make sure her husband stayed alert the whole time, sharing the story behind her “Mom hack level 1,0000 [sic.]” 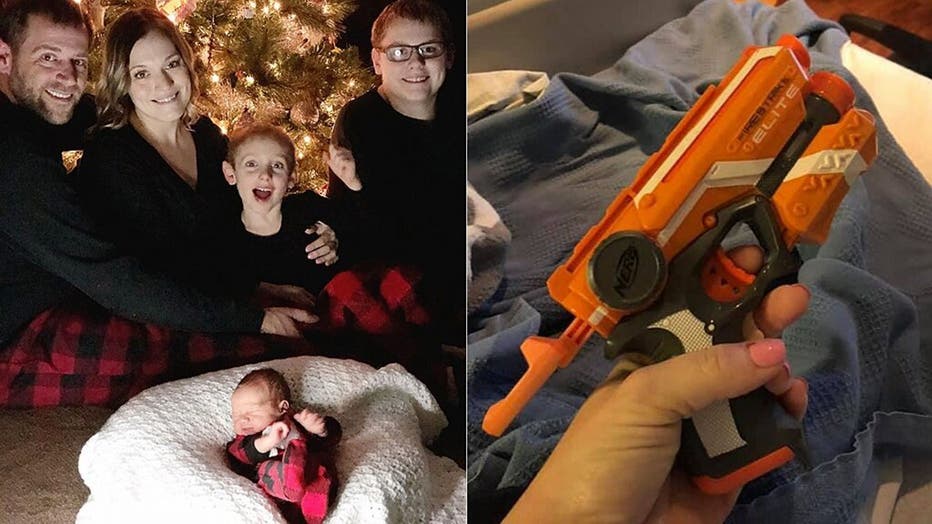 “This post came about because when my son (who’s almost six) was born, my husband slept through him crying when we were in the hospital three nights in a row,” Mravik-Miller said on Tuesday. “I had lost my voice due to being on oxygen and one of the nights my call button was also out of reach, I remember having to throw an empty water bottle at him to try and wake him up to help me get our crying baby.”

Ahead of a scheduled C-section for the December birth, the proud mom, who also has an 11-year-old son, made sure she’d be prepared.

Cleaning up toys in her house on the morning of the C-section, Mravik-Miller stumbled upon a Nerf gun and thought “I’ll have better aim with this than a water bottle!”

“Being a boy mom, nerf guns are everywhere around here! The darts are the boy’s equivalent to glitter,” she explained.

Mravik-Miller said she totally forgot the Nerf gun was in her bag by the time they arrived at the hospital, until her husband discovered it and was shocked.

“He said ‘Um why is there a Nerf gun in here?’ I said ‘All the better to wake you with!’” she recalled.

“All the nurses thought it was hilarious and I left it out for the weekend. I’m happy to say I never did have to use it!” Mravik-Miller explained.

Many social media commenters praised the woman’s “hack” as “genius” and a “game-changer” for new moms.

“I wish I woulda had this,” one Facebook user wrote.

“I might just need this for life after the baby comes as well,” another teased. “’Wake up loser, our kid’s crying.’”