In a scathing video posted to Twitter, President Trump ripped the new covid bill for not helping Americans enough.

FOX 2 - President Donald Trump issued a blistering response to the proposed COVID-19 relief bill recently approved by Congress, calling the $600 proposed payments "ridiculously low" and urging a $2,000 payment per taxpayer or $4,000 for a couple.

In a video posted to social media, Trump listed what he called wasteful spending in the proposed $900 billion bill saying it includes aid for foreign countries and little about it actually addresses the financial hardships brought on by COVID-19. 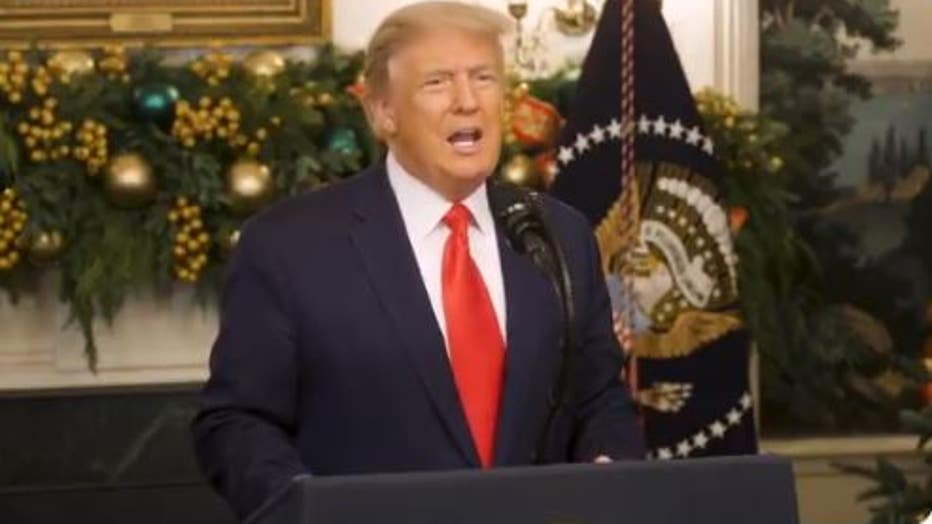 "Congress found plenty of money for foreign countries, lobbyists and special interests. while sending the bare minimum to the American people who need it. It was not their fault, it was China's fault," Trump said. "I am asking Congress to amend this bill and increase the ridiculously low $600 to $2,000 or $4,000 for a couple. I am also asking Congress to immediately get rid of the wasteful and unnecessary items from this bill."

In a surprise response, Speaker of the House Nancy Pelosi appeared to agree with Trump on the $2,000 stimulus, quote tweeting his video address.

"Republicans repeatedly refused to say what amount the President wanted for direct checks," she posted on Twitter. "At last, the President has agreed to $2,000 — Democrats are ready to bring this to the Floor this week by unanimous consent. Let’s do it!"

Pelosi did not issue a comment on the wasteful spending allegations Trump flooded much of his address talking about, in reference to the relief bill.

In Trump's video he included a list of grievances about the bill. He claimed it has foreign aid like:

"Despite all of this wasteful spending and much more, the $900 million package provides hard-working Americans only $600 in relief and not enough money is given to small businesses and in particular restaurants whose owners have suffered so grievously," Trump said.

Trump also claimed the bill allows stimulus checks for the family members of illegal aliens allowing them to get up to $1,800 each, "This is far more than the Americans are given," he said.

The president rattled off improvement projects included in the bill like $40 million to the Kennedy Center in Washington, DC, $1 million for the Smithsonian and an additional $154 million for the National Gallery of Art, he claimed. He added there is $566 million earmarked for construction projects for the FBI.

Trump then listed special interests due for help from the COVID Relief Bill like:

"The bill they are planning to send back to my deck is much different than anticipated. It really is a disgrace," he said.

"Americans need more. And better. That’s what @HouseDemocrats passed in the Heroes Act, but Senate never took up," Swalwell tweeted. "On this deal, why did (Senate Majority Leader) MItch McConnell and (Treasury Secretary Steve) Mnuchin oppose more money to Americans? And why didn’t the guy who wrote Art of the Deal, want to deal?"