"If people are looking for someone who wants to represent all of America and not just half of America, that's me," she said.

"My view of this is we've got a lot of great people running, but some of these ideas are better left in the college faculty lounge," she said.

A recent focus on rural America poll shows in Iowa - Klobuchar did better than in national polling and it might be because she is considered more of a centrist Democrat- something this same poll also indicates voters want.

FOX 2: "Why do you think you are performing so much better in that area than you do in the national polls?" 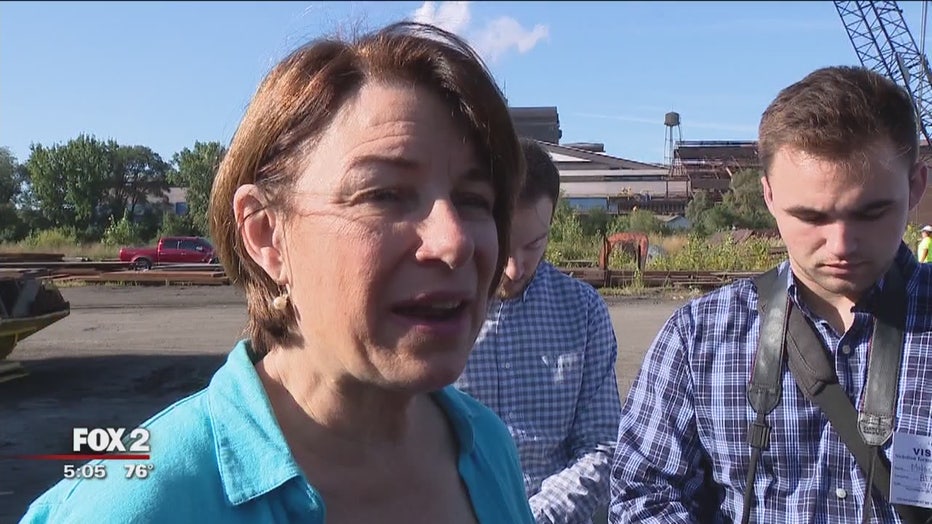 The senator from Minnesota spent the day trying to get to know the UAW GM workers on the picket line.

Her message, shared by other democrats on the trail, is landing with these voters that these Americans should get their fair share of GM's profits.

"I believe she is helping in the fight, she seems like she is a viable candidate for the Democrats," said Jeffrey Browe, UAW worker.

Senator Amy Klobuchar stopped at Nicholson terminal and dock... while she was here she put a lot of emphasis on our infrastructure not just on the roads but also waterways. She also honed in on the trade war which is hurting our economy and this business.

"We've had a short term layoff for some of our employees this year that we haven't faced in a long time," said Dan Deane, president Nicholson Terminal and Dock.

Klobuchar touted her $1 trillion infrastructure plan. Michigan's GOP chair Laura Cox - on the other side writing in statement:

Amy Klobuchar has called the job killing Green New Deal 'aspirational.' "I'm sorry senator, but if it's your aspiration to impose on our state a radical socialist scheme that will kill thousands of jobs and destroy our major industries, you can take your 'blue wall' tour elsewhere."

Klobuchar is expected to make stops in Wisconsin and across the Midwest, in hopes of getting some traction in battleground states.