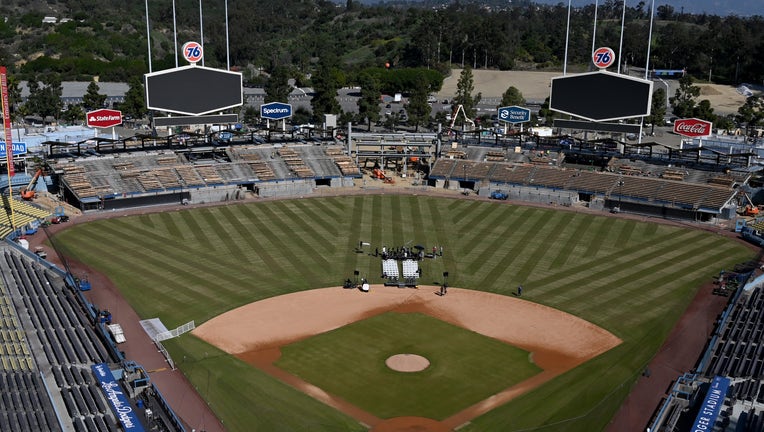 FILE - General view of Dodger Stadium during its massive $100 million renovation to the outfield pavillion on Feb. 12, 2020 in Los Angeles, California.

LOS ANGELES - Professional sports stadiums and arenas have been generally closed to the public amid the coronavirus pandemic, but now, major political groups are working to transform some arenas into polling “super centers,” serving as major voting sites during the November election.

A group of professional sports franchises have joined together and are offering up their iconic venues to voters, “reducing lines, wait-times and other potential obstacles” to casting ballots in the 2020 election.

The “Election Super Center Project” is a nonpartisan initiative formed by the National Vote at Home Institute and Silver Linings Group, two voting rights groups. In an Aug. 14 press release, the project detailed its work with the National Basketball Association, National Football League and National Hockey League to ensure that team stadiums and arenas allow for “convenient voter access.”

According to the release, the venues will adhere to CDC guidelines in order to help limit the spread of COVID-19 during socially distanced voting.

“Having additional venues available that are large enough to ensure ample social distancing with extensive health and safety protocols in place is important during this unprecedented time,” said Doc Rivers, head coach of the Los Angeles Clippers.

“These supplemental venues ensure people can exercise their right to vote,” Rivers said. We will continue to work hard off the court to secure as many large arena and venues as possible.”

Other notable figures in the professional sports world have expressed the need for accessible polling sites during the November election since the ongoing spread of the novel coronavirus can pose a risk to voters casting their ballots in person.

Along with other Black athletes and entertainers, basketball legend LeBron James formed a voting rights group this past spring to push for mega voting sites to accommodate in-person balloting amid the pandemic.

Called “More Than A Vote,” James’ nonprofit organization is a dedicated coalition of Black athletes and artists working together to educate, energize and protect young communities of color by fighting systemic voter suppression.

When are the 2020 presidential debates?

With many of the usual staples of presidential campaign politics scrapped because of the pandemic, the debates between President Trump and Joe Biden likely will take on outsized importance.

The group shared its plans with The Associated Press in July after the Detroit Pistons became the second NBA franchise to announce plans to use its arena for voting later this year. In Georgia, Fulton County elections officials this week approved the Atlanta Hawks’ proposal to use State Farm Arena as a polling site. Plans call for the arena to serve as a countywide early voting site ahead of Election Day.

James’ organization is also working with Los Angeles Dodgers to transform the franchise’s Dodger Stadium into a voter center this November.

“We are all in this together,” James said in a statement. “This is exactly why we created More Than a Vote. A lot of us now working together and here for every team who wants to follow the Dodgers lead and turn their stadium into a safer place for voting.”

The venues for the NFL’s Carolina Panthers and NBA’s Charlotte Hornets will also be used as early in-person voting sites this fall in North Carolina.

The Mecklenburg County Board of Elections agreed to a list of 33 early-voting sites that include Bank of America Stadium and Spectrum Center, The Charlotte Observer reported in July.

Mecklenburg election officials, who approved the early-vote plan late last month, expect heavy use of early voting options by county residents, either for mail-in absentee ballots or in-person voting, before Election Day on Nov. 3. Large facilities with multiple entrances are considered desirable to avoid crowds. Bojangles Coliseum in Charlotte also is on the list of approved sites. Polling site details still need to be worked out.