DETROIT (FOX 2) - About 24 hours after an intense encounter between protesters and Detroit police Sunday that was caught on video, some are calling for resignations and criminal charges for officers.

The group Detroit Will Breathe held a rally Monday evening demanding the officers who drove through a crowd of protesters be identified, fired and charged. The group is also calling for Chief Craig to resign. (Content warning: the video of the encounter may be distressing to some)

The group Detroit Will Breathe held a rally Monday evening demanding the officers who drove through a crowd of protesters be identified, fired and charged. The group is also calling for Chief Craig to resign.

"Chief Craig has to resign. He has to resign, he has no control over his department," protest organizer Nakia Wallace said Monday to the crowd.

"What you saw last night, and what I experienced was a blatant disregard for black life brought to you by "Hollywood Craig" and the "Mayor Thuggen" administration," Dwayne Taylor said at the rally. He says was there Sunday night and that he was hit by the DPD scout car that accelerated through the crowd, along with two others that spoke at Monday's protest outside the fourth precinct.

"This is the black body you see being thrown across the hood of that cop car," said another protest organizer, Tristan Taylor.

After several spoke at the beginning of the rally, the group marched for more than three hours, starting and ending at the fourth precinct. 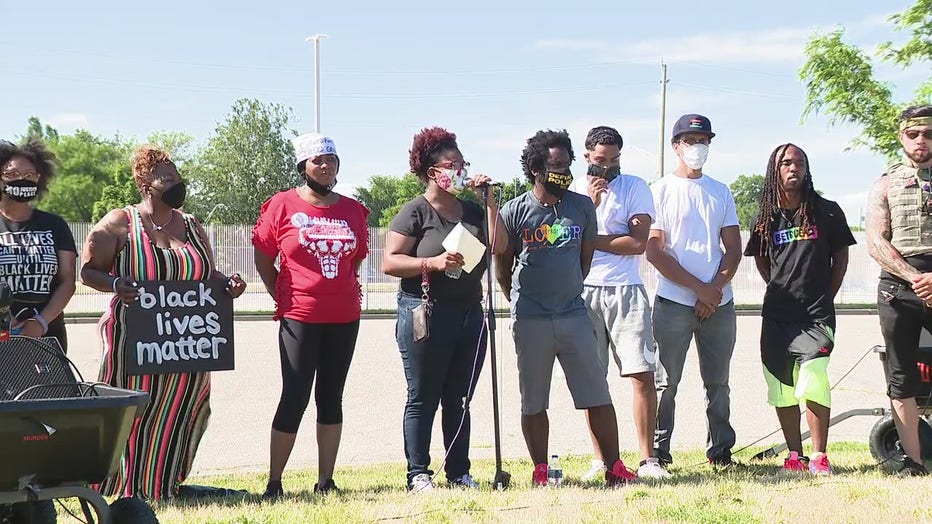 Chief Craig says DPD got involved in Sunday's protest to redirect the 350 protesters down a less-busy road at Vernor near Dix.

"Our sole purpose was to make sure that they were safe and yesterday was no different," Craig said earlier on Monday during a press conference.

Soon after, tensions escalated. Craig said police got reports of protesters being armed with hammers and a plot to antagonize police. A Twitter video shows items being thrown at the two scout cars in the mix.

After protesters walked through the attempted blockade and surrounded the scout cars, Craig says a back window was somehow broken out of one of the cars. He says officers reported that they weren't sure if they were being shot at, so Craig says one of the officers drove forward at about 25 mph trying to dislodge protesters on the hood.

"Clearly, that group did not represent peace," Chief Craig said.

But protesters claim it was the police doing the prodding and say they jumped on the hood to stop the cars to protect the other protesters walking through. We asked what they expected the police to do in that situation.

Bass, who says he was hit by the scout car, calls this Day 32 in the streets and says they're heading into Day 33 with a new intensity.

"Ya'll scared of us now? Keep playing. Keep playin'," he said at the rally.

Chief Craig hasn't responded yet to the new calls for his resignation. He did point out at his conference that it hadn't even been 24 hours yet since this happened and they are looking into the protocol those officers used but he did say the training shows when they are ambushed the protocol is to get out of the situation, which is what the officers did.

As for the back window, there was no admission from the protesters of breaking out the back window. They did admit to jumping on the hood of the car, with the explanation that they were trying to slow the car down to protect the other protesters walking through from getting hit.