SHELBY TWP., Mich. (FOX 2) - She is running for office in Shelby Township but some protesters say she has gone too far. They say she tried to scare and intimidate them when they protested against the embattled police chief.

While the woman in question denies it, protesters say Darlene Doetzel drove by earlier in the day shouting at them and giving them the finger. And things got a bit more intense the next time they saw her.

She says she only got involved because counter protesters across the street flagged her down. A young lady from the other side was sitting on their water.

"She drove up on the sidewalk and we were like 'Whoa' and we kind of dropped our signs a bit," said Activist Greystone Maddox. "And then she jumped out and I don't know if she commanded the dogs or what, but they were barking, and she said get out of here, you don't belong here."

Protesters want Doetzel, who is running for the Shelby Township Board of Trustees arrested, accusing her of trying to intimidate demonstrators. It is an accusation she denies.

"Would I aggressively drive, no," she said.

The incident in question happened Wednesday near 24 Mile and Van Dyke by the police station.  Protesters were upset the Shelby Township board did not fire the Police Chief Robert Shelide for controversial social media posts.

Activist Greystone Maddox says he watched it all unfold.

"She kept her car on the sidewalk, but the protester was right here on the grass," he said. "And then there are parking places all around here, if you wanted to pull up as a candidate, for township trustee and talk to the people and see why we are protesting or whatever, why did you not park your car like a normal person." 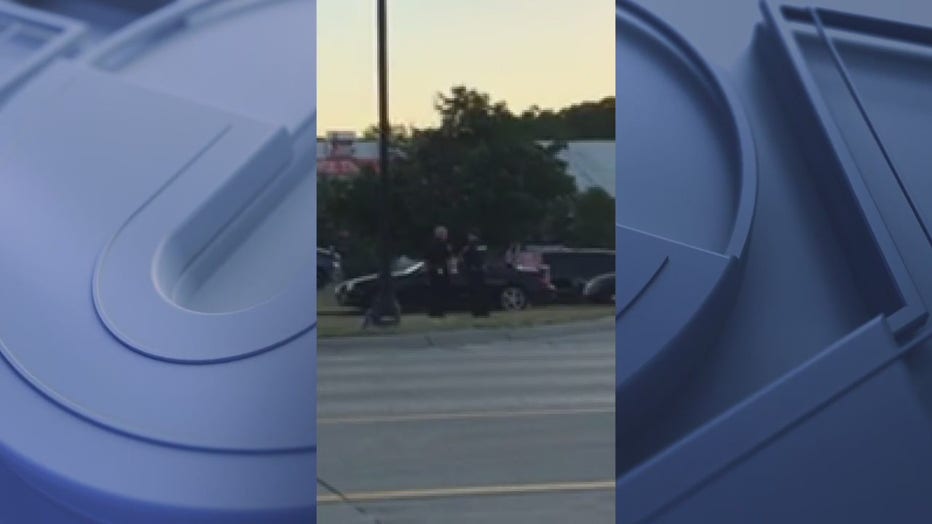 FOX 2 spoke with Doetzel over the phone. She says she only got involved because counter protesters across the street flagged her down. A young lady from the other side was sitting on their water.

"Would I incite any violence, no because you don't get anything from it," she said. "You don't win."

The video says otherwise. Maddox and other protesters urged police on the scene to give the woman a ticket.

"No ticket, no arrests, no nothing," Maddox said.

They said that since they didn't witness her trying to hit anybody they were not going to do anything," said another protester. "They weren't really trying to take a report."

FOX 2 reached out to Shelby Township police who say they have no reported incident involving a convertible driving at anyone.

But earlier that day witnesses say a man driving a white pickup truck tried to run over protesters. Police say they investigated the incident and sent the case over to the Macomb County prosecutor's office.