OAK PARK, Mich. - A shoplifting investigation turned erratic and deadly when a woman suspected of theft fled, taking an officer with her.

Sunday afternoon, 33-year-old Shira Gray was inside the Citi Trends on 9 Mile and Coolidge Street, apparently seen stealing clothes. After leaving, employees gave Oak Park police officers descriptions of her and the vehicle she drove away in.

Within minutes, her Chevy Equinox was pulled over near the story and Gray handed her license.

After she was pulled over for suspected theft of clothes at a Citi Trends store, Shira Gray drove off with one cop still partly in her SUV. As one officer was dragged by the fleeing car, two other officers ran back to their squad car. After a warrant was issued for her arrest, Gray turned herself in on Wednesday on multiple charges.

"When our officer asked the driver to step out to further investigate the crime that occurred at the retail store, the driver put the vehicle in drive," said Lieutenant Troy Taylor of the Oak Park Police Department.

The officer was instinctively trying to turn the vehicle off when he became tangled with Gray as she drove off. Taylor estimates the officer was drag about 15 to 20 feet before falling out. Gray then blew through red lights to escape.

Cops later issued a warrant for Gray's arrest. With an attorney, the suspect turned herself in later Wednesday afternoon and was arraigned on charges of resisting and obstructing a police officer causing injury, as well as fleeing and eluding.

Another detective in the court during the arraignment said it was "sheer dumb luck" that the officer escaped with bruises and bumps instead of a worse injury.

Court records show Gray has a history of retail fraud as well as previous convictions for felony firearm, firing a weapon at a building and assault with a dangerous weapon. On top of all of that, Gray is on probation in Wayne County. But the collateral damage doesn't stop there.

"The Sterling Heights Police Department is pursuing a warrant for retail fraud against Miss Gray," said a detective in court. 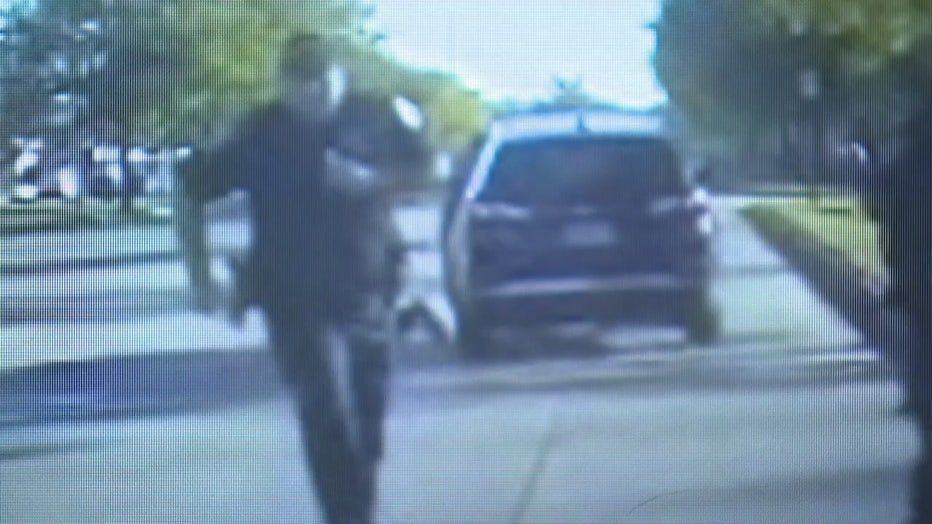 Gray's defense attorney Camilla Barkovic asked for a personal bond for the suspect, arguing she was a single mother of four children and a life-long resident of Michigan with strong family support. She was unsuccessful and Gray is ordered to pay $50,000 in cash to get out of jail.

"It was pretty petty. Some clothing being offered for sale, I dunno if they were needy or greedy," said Taylor.