ROYAL OAK, Mich. (FOX 2) - Ray's Ice Cream in Royal Oak has been open for 63 years but has been facing an unknown future since the COVID-19 pandemic hit starting in March 2020. After their story aired on Tuesday, the city and community have rallied and have thrown them a lifeline, saving the business.

Tom Stevens told FOX 2 on Tuesday that the shop opened in 1958, the year he was born, and he started working there when he was 7. Stevens worked with his grandfather and his dad and uncle and now his nephew and daughter work there, too.

Ray’s Ice Cream saved by donations, line down the street

Just hours after the owners of the Royal Oak ice cream shop posted a GoFundMe, the business was saved by customers and donations.

The future of the business was bleak. Until Wednesday.

"We have literally had a line out the door all day long. It's just crazy," Stevens said.

And just like that, after $50,000 was raised, the beloved ice cream shop avoids the fate of so many other small businesses and is able to keep the doors open and the freezers on.

"It's very, very humbling as far as the outpouring we've had and the money that's been raised in less than two days," Stevens said.

The four-generation business is able to keep scooping and dishing out ice cream and it's an emotional victory for Stevens.

"I’ve teared up a few times today, I really have," he said.

The problems didn't all start during COVID. First, it was road construction on Coolidge that first slowed down the foot traffic, then came the pandemic, followed by the closing of restaurants and banquet halls - which took the big orders off the books. Then the bills piled up.

It wasn't easy but Stevens knew he had to ask for help. 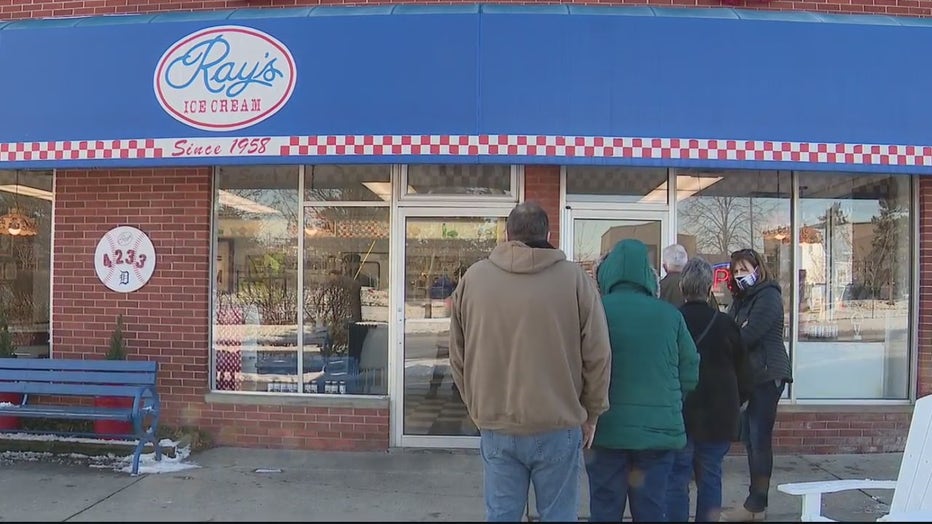 A line of customers waits outside Ray's Ice Cream in Royal Oak after the owners posted a GoFundMe in hopes to survive the COVID-19 pandemic.

"I had to swallow my pride a little bit to go onto GoFundMe - that was a little bit hard to do," he said. "You should be able to make it on yourself but we're in that dire straits right now."

"We saw the news story from yesterday and said 'we're going to get some ice cream, help out Ray's," said one customer.

They weren't alone. Wednesday morning, Ray's had a line unlike any you'd typically see outside an ice cream shop in Michigan in January.

Tom hasn't even been paying himself lately and says the boost will let them keep treading water for a bit longer until things hopefully get back to normal.

"Can’t tell you how much I appreciate everything everybody's done for us," he said.