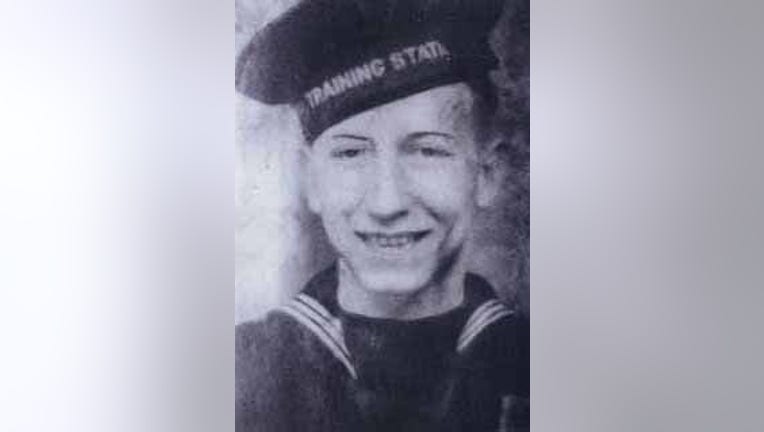 KALAMAZOO, Mich. - After 80 years of being unaccounted for, the remains of a former U.S. Navy soldier from Michigan that was killed during the assault on Pearl Harbor have been identified.

Navy Seaman 1st Class Joe Nightingale of Kalamazoo, missing since the USS Oklahoma in 1941, will be buried in Augusta, Michigan in December. Nightingale was among the soldiers that the U.S. military buried at a cemetery in Hawai'i after their remains could not be identified.

Now, years after the government's efforts to ID the fallen soldiers fell short in 1947, scientists part of the Defense POW/MIA Accounting Agency confirmed his identity.

Nightingale was killed on Dec. 7, 1941, while assigned to the USS Oklahoma, which was docked at Ford Island, Pearl Harbor at the time of the attack. Several torpedo hits to the ship's hull caused it quickly capsize, taking the lives of 429 crewmen with it.

That included Nightingale, who was just 20 at the time.

Between 1941 and 1944, the remains of the deceased crew were gathered and interred at two cemeteries on the island.

In 1947, laboratory staff managed to identify 35 men through the American Graves Registration Services, which was tasked with identifying fallen U.S. personnel. The former service members that could not be identified were then reburied at the Punchbowl, a national cemetery in Honolulu.

Two years after that, a military board classified those that could not be identified as non-recoverable.

But efforts resumed in 2015 when members of the DPAA exhumed unknown soldiers from the gravesite for further analysis.

Nightingale’s name is recorded on the Courts of the Missing at the Punchbowl, along with the others who are missing from WWII. A rosette will be placed next to his name to indicate he has been accounted for