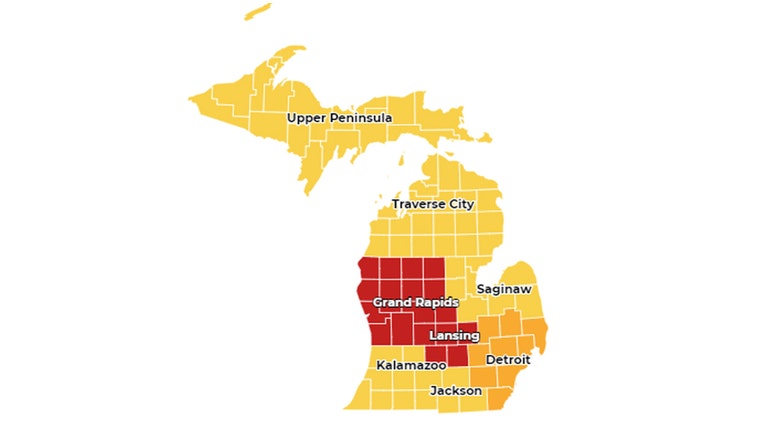 (FOX 2) - State officials have increased the official risk level for the spread of COVID-19 in several regions throughout Michigan this week.

The Lansing, Saginaw, Kalamazoo and Jackson regions all stayed at the same risk level.

Saginaw, Kalamazoo and Jackson are in "medium risk" and the Lansing region is in "high risk."

"Although the Lansing Region case rates have decreased in the last week, the region remains High risk level," the website reads. "The Kalamazoo and Jackson Regions are at the Medium risk level. However, data from both regions indicates they may increase in risk level shortly. Case rates and testing positivity have declined in the Saginaw Region over the past week."

The risk map is different from the MI Safe Start plan. Determinations of risk levels are made for entire regions, based on individual indicators and other epidemiologic information. Individual indicators, also shown on the website, are computed for counties as well as regions.

Right now six of Michigan's regions are in Phase 4 of the MI Safe Start plan, and the Upper Peninsula and the Traverse City region are in Phase 5.

Gov. Whitmer had said her hope was to progress the whole state into Phase 5 by the July 4 weekend but increasing cases kept her from doing so. She also closed indoor service at bars last week after several had been linked to a growing number of cases.

She also most recently said in an interview on CNN that the state may have to 'dial back' reopening even more as COVID-19 cases rise.

Gov. Whitmer has called a press conference for Thursday, July 9 at 11:30 a.m. to discuss the state's response efforts to COVID-19. You can watch live with FOX 2 on TV and online at fox2detroit.com/live.