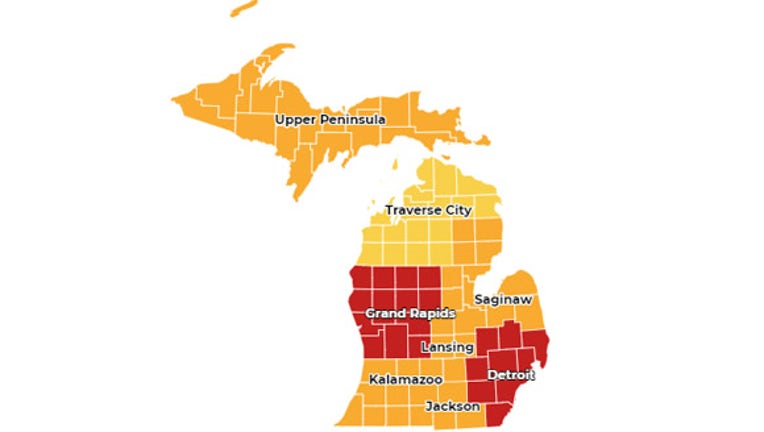 (FOX 2) - State officials have issued a correction after a website error earlier on Friday signified that the Detroit region had been increased to a "high" risk for COVID-19 spread.

Grand Rapids is the only other region in "high-risk" right now. Saginaw, Lansing, Kalamazoo, Jackson and the Upper Peninsula follow behind in the "medium-high" risk, and the Traverse City region is in "medium risk."

Gov. Gretchen Whitmer and the state's medical director Dr. Joneigh Khaldun held a press conference Wednesday to address the state's response to the uptick in cases.

But in another bout of troubling news, she said the state's percent positive rate is also increasing.

She said we're at 3.4%, up from 2.8% the previous week. She said 3% is the cutoff that experts are saying you want to try and stay under. She also said that because the percent positive rate is going up, it indicates that we're not simply just seeing more cases because we've increased testing.

"Young people are not immune to this disease. You can get very sick, need to be hospitalized, and even die. There are possible longterm health impacts, many of which are still unknown. People can have persistent lung damage, longterm brain damage and psychiatric challenges," she said.

She also urged anyone who's working outside the home, feeling sick or has been in contact with those who are feeling sick to get tested. You can find a testing site near you at www.michigan.gov/coronavirustest.

The risk map is different from the MI Safe Start plan. Determinations of risk levels are made for entire regions, based on individual indicators and other epidemiologic information. Individual indicators, also shown on the website, are computed for counties as well as regions.

Right now six of Michigan's regions are in Phase 4 of the MI Safe Start plan, and the Upper Peninsula and the Traverse City region are in Phase 5.

Gov. Whitmer had said last month that her hope was to progress the whole state into Phase 5 by the July 4 weekend but increasing cases kept her from doing so. She also closed indoor service at bars after several had been linked to a growing number of cases. Face mask regulations have also been toughened.