DETROIT (FOX 2) - A couple of weeks ago FOX 2 did a story on this history-making art exhibit during Black History Month at The Scarab Club in Detroit - and after it aired we got an email.

It was her senior photo from Detroit Southwestern High School class of 1956, along with a hand written cake recipe in that envelope. It was a collage Oneida Adkins didn't even realize was on display.

"That was a picture of me just shown from Scarab Club - I was about 18 years old - that is some of my granddaughter's Rachel Thomas' work - I was so surprised.

Onedia Adkins is our colleague, she has worked at FOX 2 for 22 years and she is 82 years old. The other day she turned on FOX 2 - and saw herself - in an art exhibit called "The Souls of Black Folk."

"Just as I turned it on, up popped my picture I said hey, that's me," she said.

It was her senior photo from Detroit Southwestern High School class of 1956, along with a handwritten cake recipe in that envelope. It was a collage Oneida didn't even realize was on display.

"I've always wanted to do a collage with her but it was never the right time," said Rachel Elise Thomas. "And I always wanted to use that particular picture and I thought, okay this is the perfect opportunity."

Thomas is Onedia's granddaughter and this first-of-its-kind art exhibit at The Scarab Club in Detroit was that perfect opportunity. It is the first time this artists' club has ever celebrated Black History Month. 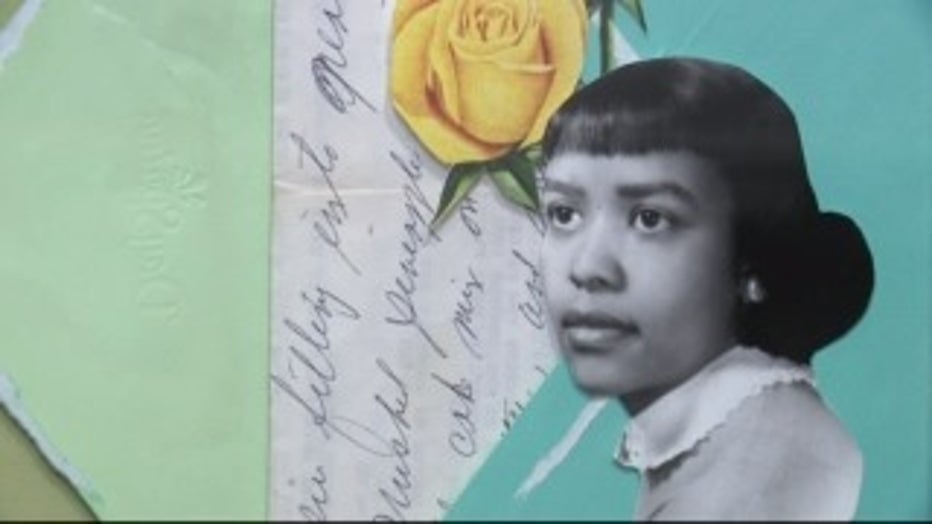 "It's amazing - I'm really proud of it, it's historic - the first all-Black exhibition at The Scarab Club - it's really exciting," she said.

Thomas, 32, graduated from the College for Creative Studies. Her work has been featured in The New York Times and Rolling Stone magazine.

She loves to feature her family in her collages - like "Pageant Mom," showing her mother Michelle, in a beauty pageant while she was a student at Detroit Cass Tech High School.

The Detroit roots run deep in this family - and the love does, too. Rachel says the feedback on Onedia - has been touching.

"Oh they love it," she said. "It makes people feel warm. I've been told they feel like they're having an embrace with their grandmother.

But it's this grandmother and our FOX 2 colleague who this year gets a special place,  in a special exhibit, along with her granddaughter, celebrating Black history. 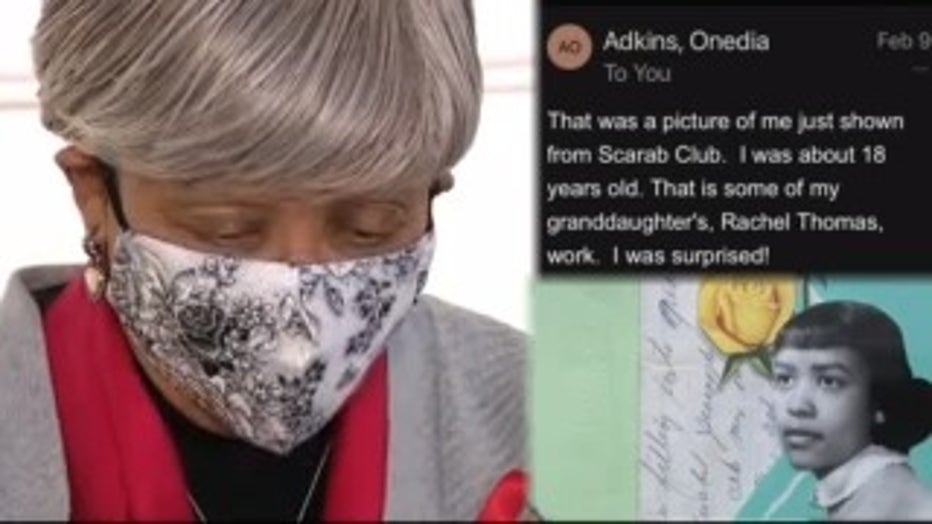 Oneida Adkins, left, her message to FOX 2 and the art of her she didn't know was on display.

"I'm very honored and blessed to have a granddaughter such as this," Oneida said.

"This is something made by me and it's for so many other people to see - it's my family history - on display," Rachel said.

"The Souls of Black Folk" exhibit runs through March 20th at The Scarab Club.