FOX 2 - Last month we told you about a tailor who appeared to be ghosting brides looking to pick up their dresses. Since our story aired -- FOX 2 heard from several more brides all sharing the same stories. And still -- the gowns are nowhere to be found.

The seamstress has closed up shop permanently - but still has the wedding dresses that were dropped off months ago for alterations.

Bride-to-be Jessica Billeb has been without her wedding gown for months after giving it to Jasmine Hollon for alterations. Hollon owns Alterations Unlimited which was first located in Brighton and more recently, Mason.

She announced Tuesday she would be closing permanently and giving the dresses back to their owners Wednesday. Jessica went to pick it up Wednesday but, no luck.

"I tried calling and texting her, she didn’t show up, didn’t respond," she said. "She actually texted my fiancé and said she was in an accident."

And Jessica was far from alone.

"Everybody goes to the store today, there were six other brides there and she completely ghosts everybody," said Jessica's fiance Aaron Tonna.

FOX 2 first reported about Alterations Unlimited owner Jasmine Hollon back in July. Customers who paid for alterations feared not getting their dresses in time for weddings.

Several people contacted FOX 2 after that story saying they too, had similar experiences.

"My son’s wedding is August 13th," viewer Karen Freyer wrote. "And Jasmine Hollon has canceled my appointments five times to get my dress for his wedding."

"Jasmine was evading us about a refund for the services she promised us by the deadline," Kyle Bell wrote. "After several attempts to reach out to her and her not responding, we showed up in person to her business, where she quickly dismissed us and said she would not
talk to us unless it was a scheduled appointment."

"We get here and it's locked, there are no lights on, and we tried to give her a call and she did not answer and her mailbox is full," said Kerri Sellers.

Sellers and her future daughter-in-law Rachel Hodge were outside Alterations Unlimited in Mason Wednesday evening. They had an appointment for Rachel’s dress for her wedding in October, but Hollon never showed. Rachel has spent thousands.

As for Jessica who spent about $3,000 on her original dress, alterations for it, as well as for two bridesmaids, she just bought a new gown Wednesday for her big day this Saturday.

"My grandmother who is 78 years old is actually taking the reigns on this right now for the alterations," Aaron said. "She's really stepping up."

FOX 2 reached out to Alterations Unlimited for comment, but have received no response yet.

Mackenzie Dancer who we profiled in our first story, did get her dress just days before the wedding she was attending. 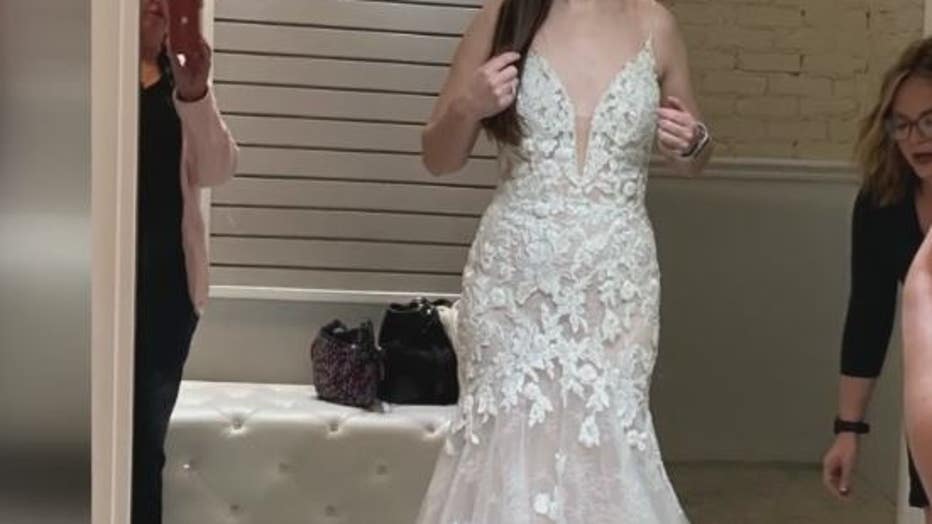