A bit of Congressional high brass was at a community center in Detroit this weekend to discuss the best ways to mitigate future natural disasters like flooding - among the most consequential story lines of the summer for a city that's been submerged multiple times.

DETROIT (FOX 2) - Michigan Rep. Rashida Tlaib and Vermont Sen. Bernie Sanders visited Detroit on Saturday to discuss the needs of the nation for flood mitigation in a city that has experienced it plenty this summer.

"Our lights are still out after weeks and weeks," Tlaib said. "It is so important when we are talking about DC that we bring Congress to our communities and make sure they understand how it impacts our lives."

Sanders highlighted the details of a $3.5 trillion dollar budget resolution passed by the U.S. House last week with a focus on traditional infrastructure.

State lawmakers Tlaib, Debbie Dingell and Andy Levin said the decision made in our nation's capital could have drastic impacts here at home.

"We've had the sixth storm in seven weeks. If one more person tells me these are once-in-a-lifetime storms... Dearborn flooded again," Dingle said.

A vote in the House is guaranteed to be made before Sept. 27 on the infrastructure bill according to the deal Democrats reached.

The Oakland County Republican Party said in a statement, "Sending the face of progressive socialism to Michigan to try and sell people on the idea of supporting a bloated budget when we’re mourning the death of 13 American Servicemen couldn’t be more tone-deaf and bad timing, The $3.5 trillion budget does nothing but throw more money at our nation’s problems while not actually solving them and adds more debt to a nation already in debt up to our ears."

"Our Republican colleagues will say, ‘they’re raising taxes,' well, you are right. We are raising taxes on billionaires who in a given year do not pay a nickel in federal taxes," Sanders said.

Along with traditional infrastructure, the proposal addressed what the Biden administration calls "human infrastructure" such as green energy, free pre-k and community college. 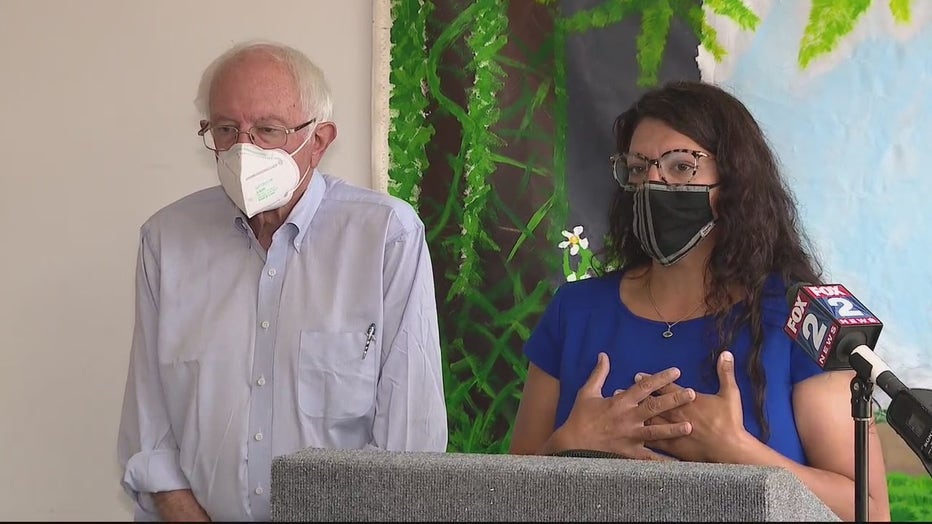