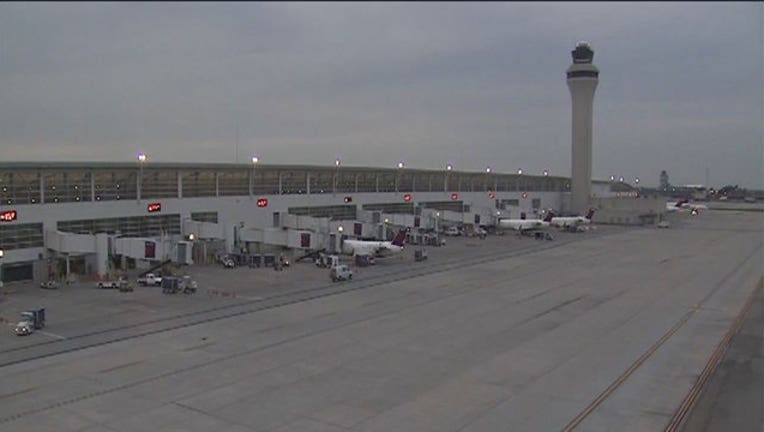 CHICAGO (AP) - The Latest on a winter storm affecting parts of the U.S. (all times local):

Thousands of air travelers are being delayed by a winter snowstorm that's moving across the across the upper Midwest.

By early Friday, more than 100 flights were canceled at Detroit Metropolitan Airport in Romulus, Michigan.

Airlines had warned travelers earlier in the week to expect flight cancelations to and from Minnesota, Michigan, Wisconsin, Illinois, Indiana and Ohio.

Some courts and government offices shut down, joining schools in the path of the storm that closed for the day in Illinois, Indiana and Michigan. Court closings were reported in Chicago and Detroit, and driver's license offices were shut in the Chicago area.

Snow from a winter storm moving across the Great Lakes is leaving roads treacherous, closing schools and cancelling hundreds of flights across the upper Midwest.

The storm is expected to drop about a foot (1/3 meter) of snow or more in some areas by the time it moves eastward out of the region Friday night. Some of the highest totals are forecast in the Chicago area, northern Indiana and southern Michigan.

Meteorologist Heather Orow in Grand Rapids, Michigan, says the storm is "generally going to be an issue for travel." People should stay off the roads if possible and expect delays and hazardous conditions.

A winter storm moving across the Great Lakes that's forecast to drop about a foot of snow in some areas has closed schools and forced the cancellation of hundreds of flights.

The National Weather Service issued winter-weather warnings and advisories across the upper Midwest. The snow that began falling late Thursday afternoon is expected to continue through Friday as the storm moves east.

The expectation of up to 12 inches around Chicago prompted officials to close the city's public schools to about 390,000 students on Friday.

Weather service meteorologist Trent Frey says the forecast is for up to nine inches of snow in Detroit through late Friday. Schools across Michigan also cancelled classes.