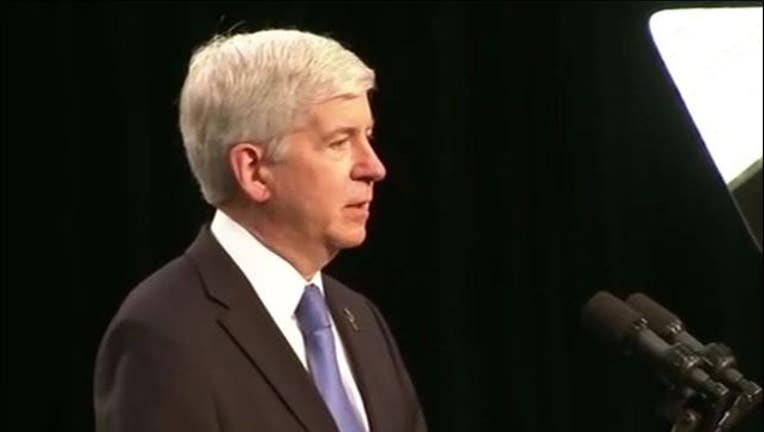 LANSING, Mich. (AP) - Michigan would spend $20 million to upgrade security at up to 400 schools, expand a tip line that lets students report threats and require schools to incorporate behavioral health assessments into their procedures under a plan Gov. Rick Snyder outlined on Monday.

The proposal was developed in the wake of the shooting massacre at a Florida high school in February and at a time the state has received record-high tips to OK2Say, Michigan's confidential tip line for students.

"This is a terrible national crisis. We've done good things, but I think we can do more," Snyder told The Associated Press in an interview before releasing the plan, which does not include gun-related measures. He said he continues to study "red flag" legislation, which would allow courts to order the temporary seizure of guns from people showing signs of mental distress or violence. That legislation has not been embraced by his fellow Republicans in the Legislature.

"What I wanted to do to start this, though, was not make it about guns but to make it about the schools and school safety and how to protect our students and people working in the schools," he said. "Because there's a lot of good things we can just start now or reinforce now that are already out there."

Snyder called for $20 million in grants to harden school buildings with improved lock systems and radio communications. That would follow $2 million the state allocated in 2017 and $4.5 million spent in 2015.

He proposed tripling the budget of the OK2Say program to $1.3 million, both to increase student awareness and to hire more analysts to receive and process tips that are forwarded to schools officials and law enforcement. He also called for a $2 million pilot grant program to train teams of school administrators, school resource officers and others to help identify students who pose a threat to themselves and others.

Both the FBI and Secret Service recommend that every school have such a behavioral assessment team, according Snyder's plan.

He also proposed standardized training for school resource officers and requiring schools to have safety plans that are broader than emergency response.

He said it is unclear, for instance, how many resource officers are embedded in schools. He will create a school safety task force to develop more recommendations and wants the state to establish a permanent commission to review and help update Michigan's school-safety plan annually.