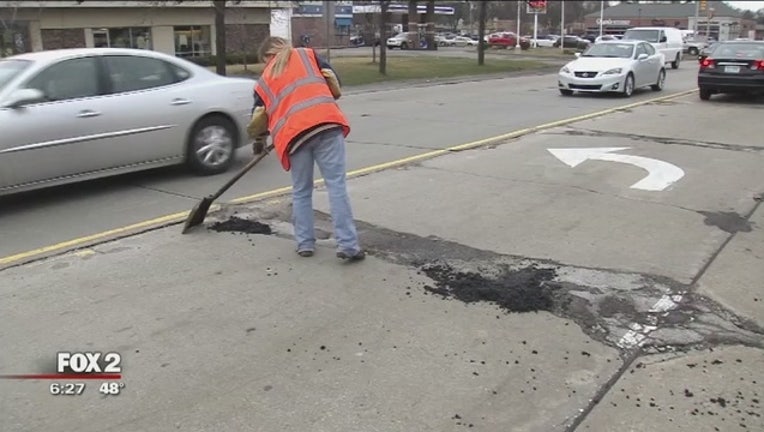 LANSING, Mich. (AP) -- Gov. Rick Snyder is calling for unspecified "wholesale revisions" of how Michigan divvies up road construction money after his veto of legislation that would have ended a requirement that 45 cities cover some of the cost of state road projects within their limits.

The bill was prompted by angst among cities over having to pay up to 2.5 percent of a massive reconstruction and widening of Interstate 75 in Oakland County, north of Detroit. But it would have had effects across the state, in any city with more than 25,000 residents and roads with an I-, US- or M-numbered designation inside their border.

The Republican governor vetoed the measure Friday despite it winning unanimous approval from the GOP-led Legislature. He warned that forcing the Michigan Department of Transportation to fully fund certain state highway projects would result in $22 million less for other projects at a time that "aggressive" spending is needed to upgrade crummy roads everywhere.

In January, Michigan's 19-cents-a-gallon gasoline tax will increase by 7.3 cents and the 15-cent diesel tax will jump by 11.3 cents. Vehicle registration fees will rise by 20 percent.

Larger communities, Snyder said, already receive more funding for "equivalent major mileage" of state trunk lines within their boundaries. He questioned why they should keep the extra money while "eliminating a major reason for receiving it in the first place."

Snyder instead asked lawmakers to pass by year's end "wholesale revisions" to Public Act 51, which governs how transportation funds are distributed, rather than tackling it in "piecemeal fashion."

"Any time you have unanimity, it's a strong indication that this is good policy," he said. "The governor decided that MDOT was more important than our local communities. It's just flat-out unfair that he would veto this bill. Cities should not be paying for roads that they don't own."

He did not rule out pressing for a veto override, which would need support from two-thirds of the House and Senate.

Troy, Royal Oak and Madison Heights are on the hook to spend nearly $20 million on the $1 billion I-75 project while nearby Bloomfield Township will owe nothing, Knollenberg said. He characterized the additional money the cities get now as "peanuts" compared to the cost-sharing requirement on such a large project.

"It would take 32 years to fully recover that cost of the project," Knollenberg said of Troy.

Snyder did not specify how the funding law should be rewritten other than to note it has "archaic and complicated provisions." Spokeswoman Anna Heaton said the law should be simpler.

In 2011, Snyder said Michigan could no longer afford to spread limited funding thinly across 617 road agencies, many of them responsible for just a few miles of road. Seeking efficiencies, he called for giving the funding of small communities to a larger local road agency as long as it still maintains the affected roads and bridges.

As recently as 2013, while pushing for a $1.2 billion proposal, he proposed directing the bulk of any new revenue toward commercial routes in more populated areas key to trade and business. But he and the Legislature avoided talk of how the money should be divided, with much of the focus concentrated on overcoming political resistance to fuel tax hikes.

A plan finally was enacted in November and will be phased in over time.

Lawmakers stuck with the current formula, directing 39 cents of each new dollar in the Michigan Transportation Fund to MDOT, 39 cents to county road commissions and nearly 22 cents to cities and villages.

City leaders have said that Public Act 51, which was first enacted in 1951, disproportionately favors the building and maintenance of rural roads instead of urban roads used by more people.

Knollenberg said he would be "happy" to talk about recasting the law but added that it has been on legislators' radar at least since he was first elected a decade ago.

"We should look at it. But in the meantime we've got some pretty low-hanging fruit here," he said of his legislation.