Unemployment recipients told they need to pay thousands back

Thousands of people applied for, and received, COVID-19 pandemic unemployment assistance, but thousands also received a letter saying they need to pay that back.

DETROIT (FOX 2) - Thousands of people applied for, and received, COVID-19 pandemic unemployment assistance, but thousands also received a letter saying they need to pay that back.

Morgan is one of those people. She was doing odd jobs before the pandemic and qualified for help in April 2020. 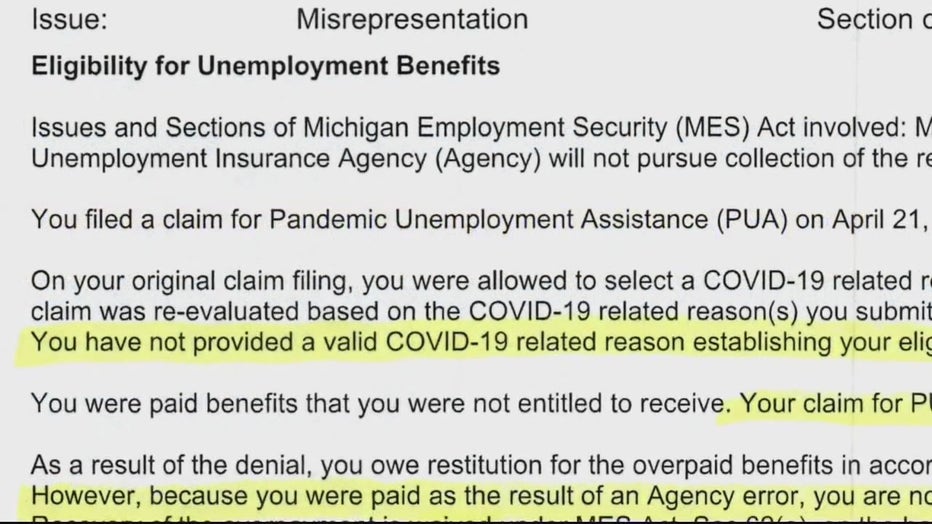 He says what is happening is a big issue.

Paris said that it was a good idea to give benefits to people who otherwise wouldn't have qualified for unemployment. However, it overloaded antiqued software.

"You placed all those new filers on a system that was already broken, and it's like pumping air into a torn tire," he said.

FOX 2 contacted the Unemployment Insurance Agency, and received this response: "While we cannot publicly discuss the details of an individual claim, UIA is continuing to aggressively identify workers who may be eligible for an overpayment waiver."

The department did say that to date, its approved 55,000 waivers and more were likely.

If you are facing a simitar situation, you can contact Paris through the Sugar Law Center.

For those facing overpayment questions can also request a financial hardship waiver through their MiWAM account. Any questions that people have can be resolved by setting up an appointment where they can have their case reviewed with an employee.