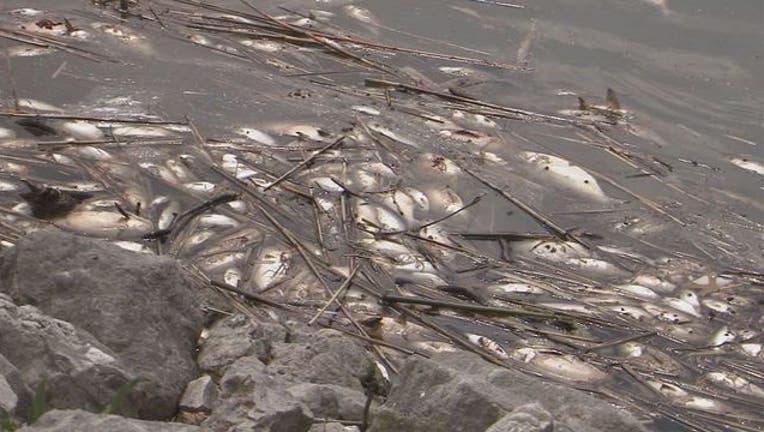 CHESTERFIELD TOWNSHIP, Mich. (WJBK) - There could finally be an explanation for what's killing of fish in Chesterfield Township. Hundreds of dead fish have been turning up in a canal behind Lighthouse Pointe, which flows into Anchor Bay in Lake Saint Clair.

The state says the fish, particularly gizzard shad, may have contracted a dangerous and very contagious virus.

The virus, VHSv, is known to affect more than 30 species of Great Lakes fish, including many that people eat. VHSv stands for viral hemorrhagic septicemia virus.

Gary Whelan, research program manager for the DNR's Fisheries Division, said in a statement that it's very likely VHSv is involved.

VHSv has been detected in these waters since at least 2003. Officials are still undergoing testing and waiting on confirmation that VHSv is what's going on.

Many of the collected fish showed the classic external signs of VHSv, though: bloody patches on the skin. VHSv first caused fish mortalities in the St. Clair-Detroit River corridor in 2006 and occasionally has been detected in these waters since that time.

The DNR is asking anglers to properly dispose of all live bait and to never transport fish from one body of water to another.

The DNR is also asking for homeowners in the area to continue reporting fish kills, especially those that include more than 25 fish. You can send reports of the fish kills to DNR-FISH-Report-Fish-Kills@michigan.gov.