The statewide coalition of parent organizations are calling on everyone to sign their petition - demanding the state Department of Health and Human services implement a mask mandate in schools.

FOX 2 - The protests over mask mandates have made news across the country and right here in metro Detroit.

But as the vocal minority shouted and waved signs - a quiet majority gave thanks for mandates doctors said would help keep their kids safe from COVID-19.

"The majority of Michigan's parents want our schools to be safe places for our kids," said Emily Mellits a Macomb County parent.

Members of the Michigan Parent Alliance are speaking out. The statewide coalition of parent organizations are calling on everyone to sign their petition - demanding the state Department of Health and Human services implement a mask mandate in schools.

"The lack of universal mask mandate in Michigan has not only left our children vulnerable to COVID-19 but also our unvaccinated and fragile community members," said Dr. Rosemary Olivero.

Olivero is a pediatric infectious disease specialist - and a parent of three. The state health department so far is only recommending universal mask mandates in schools - not requiring them.

"Families shouldn't have to count on school boards for pandemic guidance -  because we have no expertise in epidemiology or mass casualties," said Mary Hall-Rayford, Eastpointe school board. "I am not the first or only school board member asking MDHHS for a statewide- indoor mask mandate - and I won't be the last."

Sixty percent of students statewide are covered under mask mandates - but 40 percent are not. Twelve health departments including Oakland, Wayne and Washtenaw have mandates - but not Macomb.

"We have school board members out here in Macomb and superintendents that are outwardly saying they don't trust the information from the CDC, the MDHHS - so that really puts us in a tough spot," Mellits said.

These parents say they're not only trying to protect their kids, but also their ability to stay in school - in person and prevent further learning loss - which is why they're calling on the state to act.. 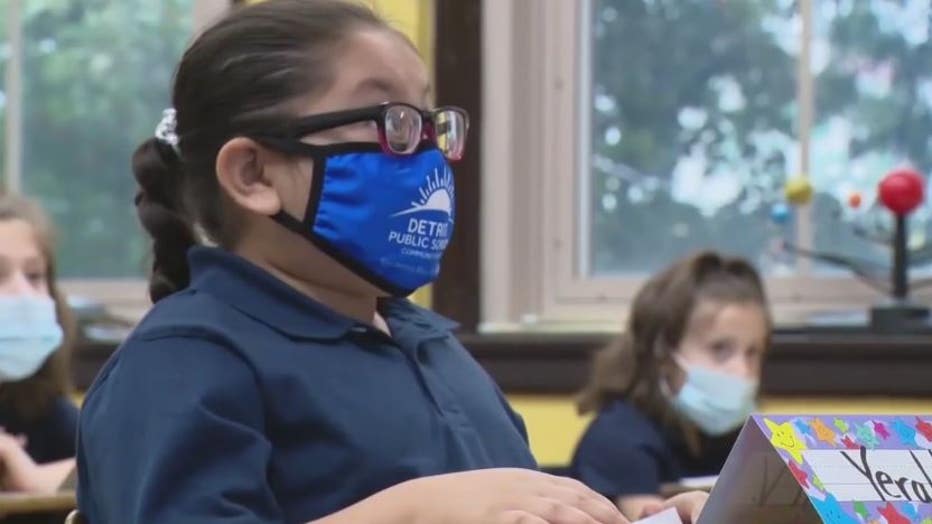 "We're not just united - we're also angry - we're angry that our voices are not being heard because of politicians who deny science and spread disinformation to their supporters and constituents," said Kathleen Lucas.

"I just pray everyday that none of my kids get Covid," said Marie Griffioen

"We encourage all parents to join us and sign our petition," said Nicole Kessler.