“The plan today is to try to hold the fire to the east,” Paul Delmerico, operations chief for the Cameron Peak fire said early Saturday. “We're facing the same critical fire conditions today as we did yesterday."

The fire grew to 293 square miles (759 square kilometers) by Saturday morning and was 57% contained.

Boulder County fire officials reported a new fire had sparked west of Boulder on Saturday afternoon. The Boulder Office of Emergency Management said on Twitter that Jamestown was being evacuated and Highway 7 was closed between the Peak-to-Peak Highway and the town of Lyons.

RELATED: Wildfire smoke in US exposes millions to hazardous pollution

The new fire was near the Cal-Wood Education Center, which is about 17 miles (27 kilometers) from downtown Boulder. The Boulder County Sheriff's office said they were evacuating the Hall Ranch and Heil Valley trails due to the CalWood Fire.

Cameron Peak fire officials said fire activity had increased Saturday afternoon and a spot fire is growing east of the main fire and was moving toward Masonville.

People along U.S. 34, the highway leading to Rocky Mountain National Park, were evacuated on Friday but Delmerico said the town of Estes Park may be spared.

“The way the fire's moving and the lay of the land, the terrain, the features, the ridge lines, we that Estes Park is not out of the woods but we feel that as the fire progresses and moves to the southeast, the way it's moving ... we do feel that the community of Estes Park is not imminently threatened or in the direct line of fire." 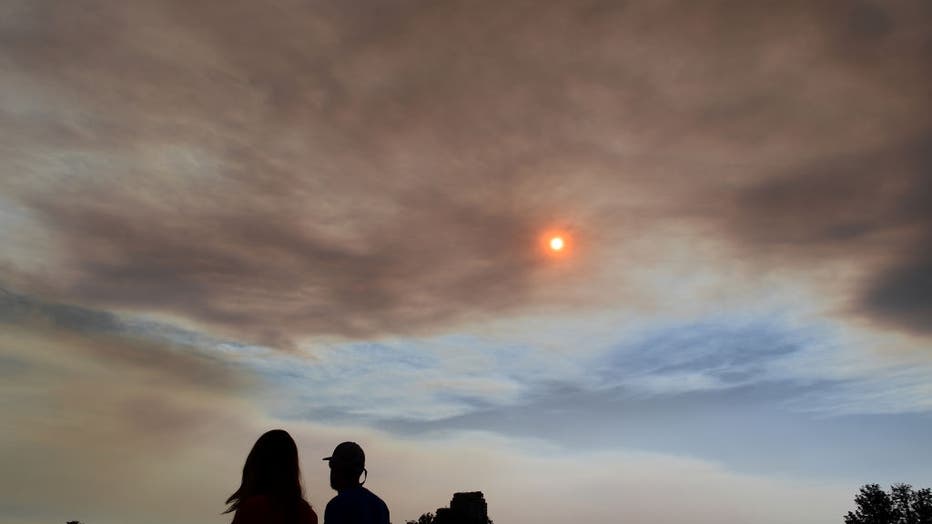 A wind shift could change that, he said, but that was unexpected.

Firefighters focused on protecting homes in and around Drake and Glen Haven, an area with hundreds of cabins perched on heavily forested slopes and ridges. The wind, however, kept not only slurry-dumping airplanes from flying but aircraft that gave firefighters a view of the deteriorating situation from on high.

The Glen Haven volunteer fire department posted a notice early Saturday saying the “only place impacted by fire as of this morning is the far end of the Retreat near the Miller Fork/Copper Hill intersection. The fire is on Bulwark Ridge but has not made it to Bulwark Ridge Road.”

A voluntary evacuation zone extended as far as the Carter Lake area 8 miles (13 kilometers) west of Loveland for people who needed extra time and were advised not to wait for a dire emergency to leave.

The fire sent thick smoke into Fort Collins and prompted evacuations all the way to Horsetooth Reservoir on the city's western edge.

It started in mid-August in the high country 30 miles (50 kilometers) west of Fort Collins and has persisted despite getting over 1 foot (30 centimeters) of snow on Labor Day. It was over 50% contained before this week's flare-ups.

Twenty-five miles (40 kilometers) to the north of the Cameron Peak Fire, firefighters were also watching a windy forecast at the Mullen Fire on the Colorado-Wyoming line. The fire has grown little this week despite the recent wind.