DETROIT (FOX 2) - Detroit police fatally shot an armed suspect Thursday on the city's east side who they say was involved in a weekend quadruple shooting.

The suspect was involved in a chase and was armed with a weapon when he fled on foot, before being shot by the officer at Whittier and McKinney near I-94. The suspect died at the hospital. No officers were injured in the incident.

The suspect was involved in a chase and was armed with a weapon when he fled on foot, before being shot by the officer at Whittier and McKinney near I-94.&nbsp;The suspect died at the hospital. No officers were injured in the incident.

"No shots were fired at the officer," DPD Chief James Craig said. "The suspect was armed and the officer believed his life was in danger. He fired a single shot striking the suspect."

The suspect was wanted in a quadruple shooting that left four teens wounded Sunday at a block party in the area of Meuse and McKinney. Craig said two of the four are now in grave condition.

Craig said Thursday that officers from the DPD 9th Precinct Gang Intelligence Squad spotted the suspect who they had information on. He got into a car with two other suspects and a traffic stop was attempted by the police.

"That was when they tried to evade police. (The) high-speed pursuit lasted about 10 minutes and traversed all of the entire east side, the 5th and 9th precincts, and culminated here at McKinney and Whittier. It stopped here because the suspect in the vehicle crashed into a pole."

During the pursuit, the car had crashed into several police cars. After hitting the post to end the chase, the three suspects then got out to run, Craig said.

"One of the suspects, as he was being approached, he had a gun in his hand," Craig said. "And the officer fearing for his safety fired one time, striking the suspect. That suspect was transported to a local hospital where he died from his wounds." 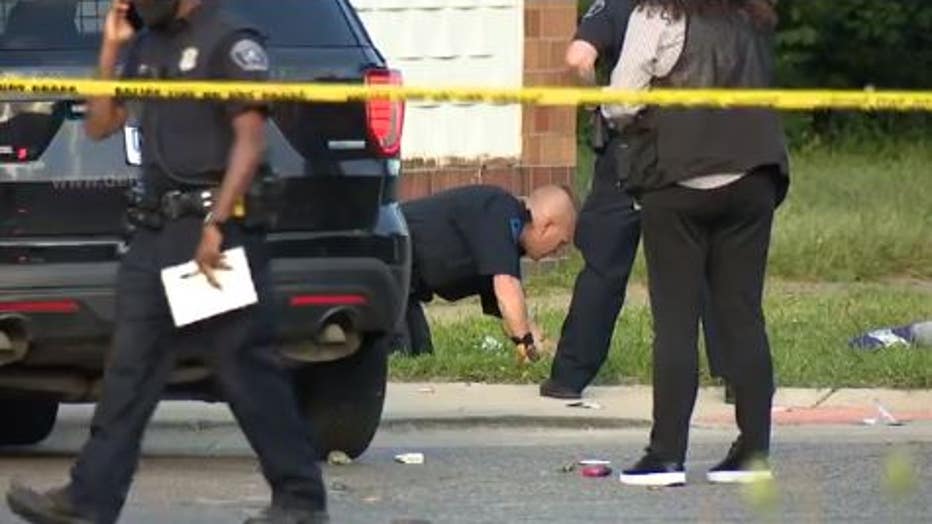 RELATED: 4 teens shot while out celebrating a birthday, Detroit Police search for suspect

One of the other two suspects inside the car who ran was also identified in connection to the Sunday shooting, the chief said. The two others inside the car were arrested. A second pistol, in addition to the one the wounded suspect was carrying, was found inside the car. Craig added that the officer who shot the suspect rendered aid to him before he was transported.

On Sunday witnesses told police that the four teens, ages 15 to 17, were out celebrating a birthday, when an unknown suspect pulled up in a neon green Dodge and fired shots, striking them.

Craig said that Sunday's shooting was gang-related and he credited the work of the 9th Precinct and the Gang Intelligence Unit.

"The violence must stop," Craig said. "We are relentless about going after individuals who create violence in our community. We are not going to stop.

"My prayers go out to the family. When you involve yourself in gang activity, two things might happen: You might lose your life, or you might end up in prison for the rest of your life. We've got two teenagers in the hospital right now fighting for their life. These officers were here doing what they are supposed to do and what they are asked to do and doing a good job of it."