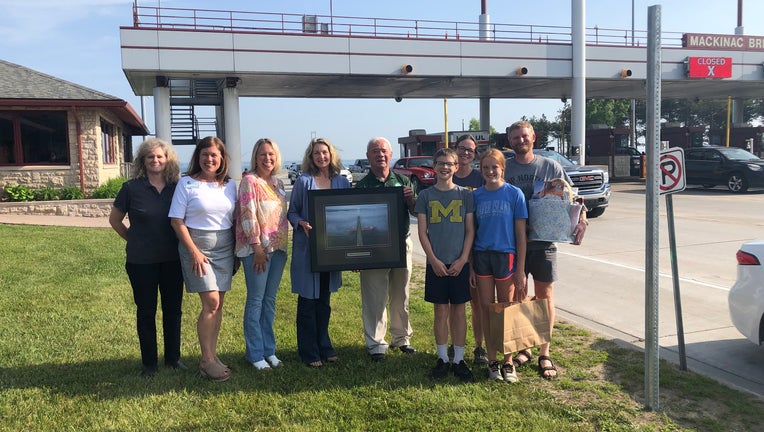 The Dalman family of Tawas City, far right, received a local gift basket and a framed print of the Mackinac Bridge after they drove the 200 millionth vehicle across the bridge. Photo courtesy of the Michigan Department of Transportation

ST. IGNACE, Mich. (FOX 2) - The Dalman family didn't know it at the time, but their trip over the Mackinac Bridge would amount to an historic milestone for all parties involved.

The family, natives of Tawas, were on their way to Pictured Rocks for "this kids first big hike" when they were informed of the monumental occasion: they were the 200th million vehicle to pass over the bridge since its opening in 1957.

"We were very surprised. We had no idea (this milestone was coming up)," said Anna Dalman.

Anna, her husband Kurt, and their kids Seth and Teresa were crossing the bridge at 6:18 p.m. on Wed. June 15 when they got the news.

The Mackinac Bridge Authority Chairman, a board member, and staff of the authority met with the family outside the toll plaza to meet the family. Of course, the Dalmans had to pay the $4 toll booth fee first.

But when they arrived, they were presented with a framed print of the bridge and a gift basket full of local items.

MORE: A look at restoration plans for the Ford Cove on Lake St. Clair

"It's our customers who pay the tolls that support the ongoing operation and maintenance of the Mackinac Bridge, so it's only right that we recognize this milestone in the bridge's 65-year history," Chairman Patrick ‘Shorty’ Gleason said. "The bridge has been a critical connection for our state for more than six decades now, but it's remarkable to know that so many vehicles, and countless more people, have crossed in that time."

A milestone this big hasn't crossed the Mighty Mac since September 2009 when a Clare man drove the 150 millionth vehicle across the bridge.