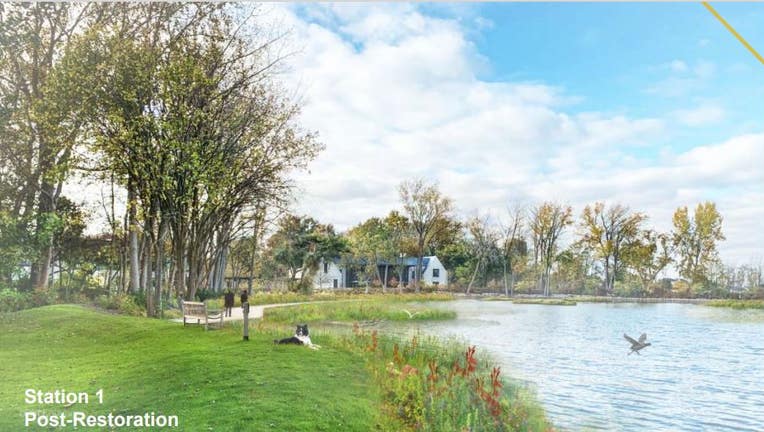 Rendering of what restoration work would look like after completed. (Photo via Ford Cove Coastal Restoration Shareholder Meeting presentation)

GROSSE POINTE SHORES, Mich. (FOX 2) - The rumor goes that when Eleanor Ford faced a shoreline erosion problem at the family's historic mansion, she lined the coast with chunks of I-94 from an old highway construction project for protection.

The old concrete's days may be numbered.

A new plan to restore the Lake St. Clair coastline at Ford's Cove would rebuild the nearby wetland, expand the shore, while also building out shoals to buffer the area from the Great Lakes battering waves. Scientists hope returning the area to a more natural state will beautify the site, while boosting local fishery populations as well.

"Almost none of the natural shoreline remains in Macomb County," said Eric Ellis, a project manager with the Great Lakes Commission. "That includes this site."

The Ford House was home to Henry Ford's son Edsel and was designed by renowned architect Albert Kahn. Jens Jensen was hired to do the landscaping. The home construction and landscaping was completed in 1929.

It's since become a property on the National Register of Historic Places and earned a designation as a National Historic Landmark.

MORE: River otter spotted in Detroit River may be 1st sighting in 100 years

While the iconic building remains a popular attraction for Southeast Michigan, the surrounding scene embodies a troubling trend along Michigan's coast: the loss of animal, fish, and plant biodiversity.

Whether its riprap, large rocks, or a sea wall, much of the coast bordering Southeast Michigan is completely foreign from what it used to be before humans arrived. Instead of natural vegetation and sloped beaches, marinas now line much of the coast. 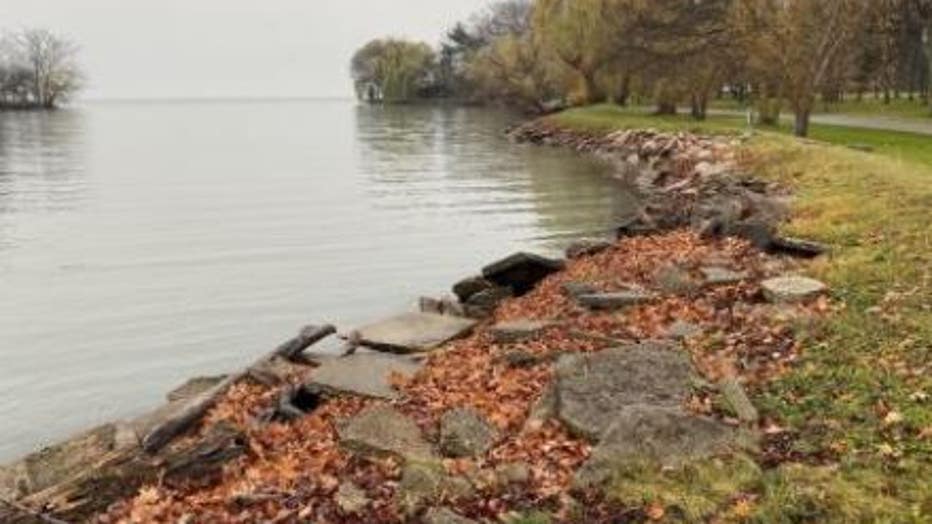 According to the Great Lakes Commission, 99.9% of the Lake St. Clair shoreline in Macomb County has been modified to suit human development - about 31.5 miles. Only 2,140 feet of the natural shoreline remains.

Scientists see Ford Cove as one of the few spots where they could reverse that shrinking shoreline trend. The results from a feasibility study assessing how that rollback might look if conservationists modified the coast were presented at the mansion this weekend. The plan calls for restoring about 5,000 feet of coastline. About 17.5 acres would also get a tune-up. 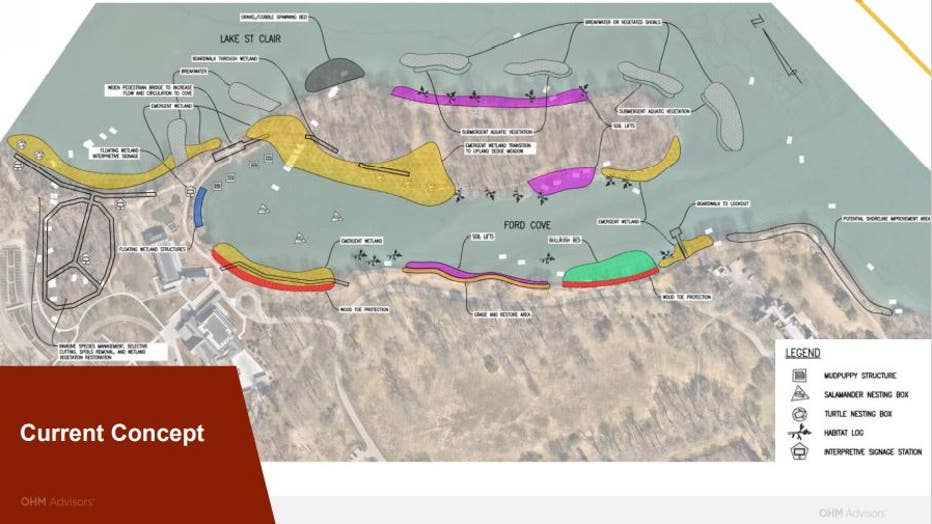 A potential project, which still needs about $7 million in funding before it could begin, would create conditions conducive for species of fish, birds, and other forms of wildlife to flourish. Small mouth bass, minnows, panfish, salamanders, painted turtles, and various forms of water fowl all native to the region would be among the species most likely to return.

"I can't think of a better place to get more bang for your buck," Ellis said.

Restoring wetlands and shorelines can bring a big return on investment. Another project along the lake to the north in Anchor Bay modified just 760 feet of Brandenburg Park, which cost about $1.1 million. It only took a year, but native aquatic plants vital for the growth of fish species grew by 500%. There was a 450% increase in bird abundance. There was also an 84% jump in fish species. Painted turtles also were spotted.

With any luck, an equally dramatic change would happen in a project five times as big.

"I'm very confident these numbers will go up in the future. We're trying to replicate that success with this work at a much larger scale." Ellis said.

Ironically, much of the work would build upon the cove that was first constructed as a buffer to the Ford House from the Great Lakes. Functioning like a natural habitat, Ellis and other Great Lakes officials want to build buffers beyond the cove to absorb the wave energy from the lake.

Spawning fishes would be better protected. A boost to the local fisheries would also mean more food for birds, which use the Southeast Michigan waters as one of the country's largest migratory pit stops.

MORE: Great Lakes shipwreck hunters had a banner year in 2021 searching for remains of old vessels

Rock slabs preferred by mudpuppies would be laid. So would logs for turtles to bask in.

"This study shows we can do some amazing things out here. We would expect to see a lot of results from the construction," Ellis said. "It would be beneficial to the public too."

Ellis noted the public engagement when experts mused a project at Ford Cove was overwhelming. A survey asking for input on the project received 500 responses and over 100 people attended the first public meeting.

"I haven't seen a site that's had this much participation by the public in any park," Ellis said. "It's been really nice to see the support and we'll continue with that through the engineering and then implementation."