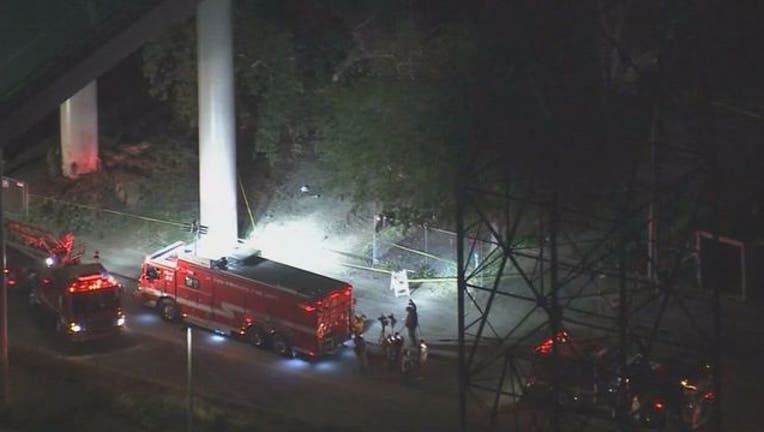 LOS ANGELES (AP) - A 13-year-old boy who fell into a drainage pipe during a family Easter outing at a Los Angeles park was found alive early Monday following a frantic, 12-hour search of the underground system, authorities said.

The search for Jesse Hernandez began around 4:30 p.m. Sunday when the fire department received reports that the boy had fallen about 25 feet (8 meters) down a pipe at the city's sprawling Griffith Park.

Rescuers finally spotted the boy about 12 hours later after they saw images of handprints on a sewage pipe captured by a camera they had lowered down into the system of mazelike pipes to help the search.

A sanitation crew sent a team to the area where the handprints were seen and opened a manhole.

The crew lowered a hose down to Jesse, who was about 11 feet (3 meters) deep, Hagekhalil said.

"He caught onto the hose and was reeled back up and he was sat down on the floor," Hagekhalil said.

The first thing Jesse wanted was a cellphone to call his family. A worker handed him his phone and Jesse called his mom.

"He was happy, the family was happy," said Hagekhalil, who added that all the rescuers involved in the search were thrilled about the outcome.

"They never gave up hope," he said. "They wanted to bring Jesse back to his family."

About 2,400 feet (731 meters) of pipe had been inspected when sanitation workers finally found Jesse less than a mile from where he disappeared. Jesse was given immediate medical attention before he was taken to a hospital for a full evaluation, and to be reunited with his family.

"We are so pleased and happy to announce a successful outcome," said fire Capt. Erik Scott. "As you can imagine, we're overwhelmed with joy."

The fire department said in a news release that "from start to finish, this was an unprecedented team effort."

Jesse fell into the pipe after he and some other children were playing on wooden planks in an abandoned maintenance building and one of the planks broke.

After an accident like Jesse's, rescuers say the likelihood of a happy outcome diminishes by the hour.

Also on Sunday in northern California, an 11-year-old boy fell into a canal in Meadow Vista, about 40 miles (64 kilometers) northwest of Sacramento. He was found dead a couple hours later.