A doctor told the Maryland mother that a contraceptive had been improperly implanted in her daughter's arm, and it needed to be removed to avoid possible complications.

BALTIMORE, Md. - A mother said her 16-year-old daughter received a birth control implant at school, and didn’t learn about it until the teenager started experiencing side effects from it being improperly planted in her arm.

Nicole Lambert sent her daughter to a pediatrician after the teenager started experiencing headaches and other unusual symptoms, according to Lambert’s attorney David Ledyard. The doctor told Lambert that a contraceptive, called Nexplanon, had been improperly implanted in the girl’s arm — and it needed to be removed to avoid possible complications, Ledyard said.

The three-year implant, which puts a low dose of hormones into the bloodstream to prevent pregnancy, should go on the inner side of the upper arm, according to Merck, the maker of Nexplanon. Provided photos show the contraceptive implant near the back of the girl’s arm.

The small implant was later removed, which Ledyard described as a “semi-surgical procedure.”

“They actually had to cut it out and remove part of this tissue as well,” he explained.

"I instantly started crying because just to hear that your child, anything could happen to your child and you didn't even know what's going on, it's a scary feeling," Lambert told WMAR-TV.

Lambert, who told the station that she was “furious” about the situation, went to the Baltimore school to discuss the issue and seek answers but was unsuccessful. 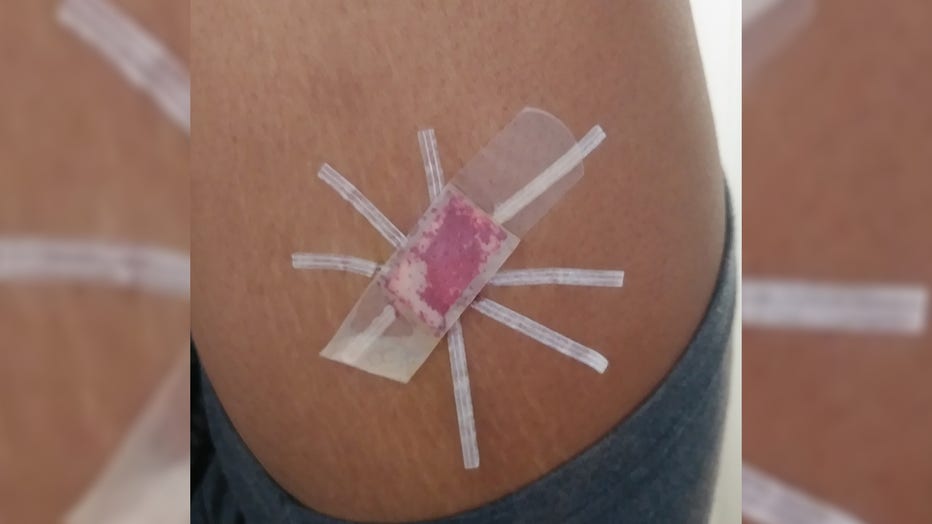 The three-year implant should go on the inner side of the upper arm, according to Merck, the maker of Nexplanon. A provided photo show the contraceptive implant near the back of the girl’s arm. (Photo credit: Provided / David C.M. Ledyard)

“In Baltimore city, the nurses are not part of the school. They’re not school employees, they are health department employees,” Ledyard said. “So the nurse said, ‘we don’t have to talk with you,’ pursuant to this law.”

In Maryland, minors can receive contraceptive services without parental knowledge or consent, according to Planned Parenthood.

According to Ledyard, the school district did not have any additional information it could provide to Lambert either — so she sought out the attorney to investigate the issue further.

“We see this as an invasive medical procedure, and there just needs to be some more oversight. How do we know these people are properly trained or certified,” Ledyard said.

Lambert isn’t opposed to teen contraceptives, but her attorney said she wants to make sure it’s done safely.

"They call me for Tylenol, but they don't call me about birth control," Lambert told the station. "You gave my daughter this insertion so she might be suffering from that, but do they even look at that?“

During the 2017 to 2018 school year, there were 164 users of birth control at five of those health centers, which is operated by the Baltimore City Health Department, according to the station. Birth control options offered include oral contraceptive pills, Plan B, Depo-Provera, NuvaRing and Nexplanon, WMAR-TV reported.

“They should have let parents know that this was going on, and also assured the parents that there are a lot of safety measures taken,” Ledyard said. “We want to make sure that if they’re providing basic medical procedures, if they’re providing even injections or pills, that they have the proper training, certification, oversight and they do a proper medical workup.”

WMAR reached out to the school system, but was told to direct questions to the Baltimore City Health Department. The health department said it was advised not to respond to questions because of a pending case against the city, according to the station.

"Our union has chosen not to comment on this case directly due to pending litigation, but we do stand behind our members, and I hope the student receives the care she needs," Wendy Smith, RN, BSN, president of AFSCME 67 Local 558, said, in part, in a statement.

Ledyard said if the goal is to prevent teenage pregnancy, more needs to be done.

“There’s been some strides in decreasing teen pregnancy. Unfortunately the instances of sexually transmitted disease and infection have skyrocketed during that same period,” Ledyard said. “If their goal is to prevent teen pregnancy, it’s not enough to implant somebody. You have to make sure they’re educated that this is not a cure-all to everything.”