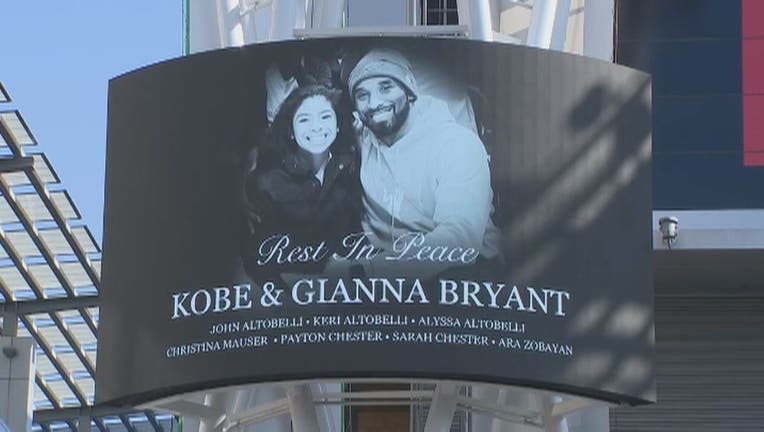 LOS ANGELES (FOX 2) - Thousands of mourners gathered at the Staples Center in Los Angeles today to say farewell to Kobe and Gianna Bryant. The basketball superstar and his 13-year-old daughter were honored in a public memorial at the arena where Bryant played for the Lakers.

As fans arrived and began to take their seats at the stadium, they received commemorative T-shirts, pins and a photo-filled program. The T-shirt featured iconic images of Bryant kissing Gianna on her head during a basketball game layered with younger versions of the pair hugging and kissing one another.

Kobe and Gianna died along with seven others on Jan. 26 in a helicopter crash on a mountainside in Calabasas, California, while flying to a girls basketball tournament at his Mamba Sports Academy. Bryant coached Gianna's team, which was scheduled to play that afternoon.

The Celebration of Life will feature speakers reflecting on Kobe Bryant's impact on his sport and the world, along with music and retrospectives on Bryant's on-court achievements. Bryant became active in film, television and writing after he retired from basketball in 2016.

Bryant's family, dozens of sports greats and many major figures in Bryant's public life are expected to attend.

Staples Center is sold out for the memorial. Organizers of the event have urged people without tickets to stay away from the arena. The ceremony will not be broadcasted on any of the outdoor screens outside Staples Center or the adjacent L.A. Live plaza. 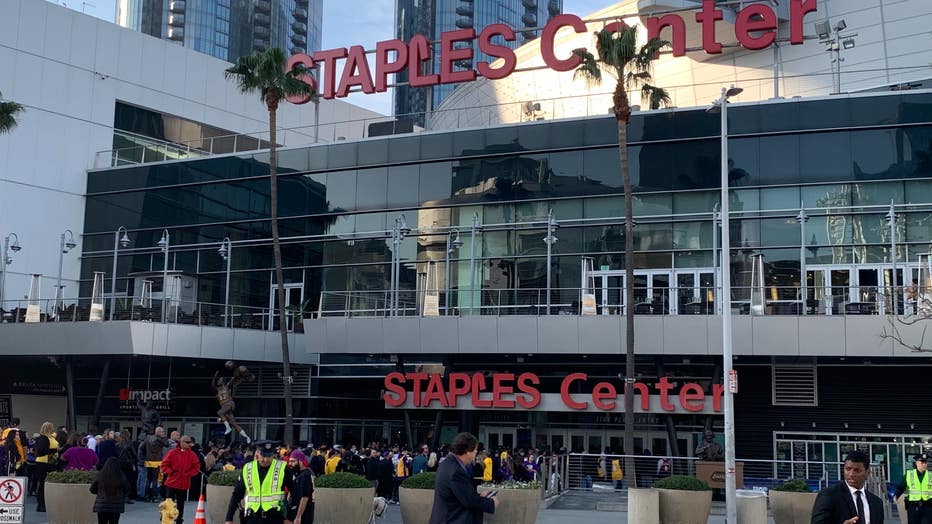 The crowd outside Staples Center in Los Angeles the morning of Feb. 24, 2020, the day of Kobe and Gianna's public memorial.

Tickets for the memorial were priced at $224 each, two for $224 and $24.02 each, depending on their location. The prices coincide with the No. 24 jersey Bryant wore and the No. 2 worn by Gianna, who went by the nickname, Gigi.

The money made from ticket sales will be given to the Mamba and Mambacita Sports Foundation, which supports youth sports programs in underserved communities and teaches sports to girls and women.

Bryant played his entire 20-year NBA career with the Lakers, including the final 17 seasons at Staples Center, which opened in 1999. The five-time NBA champion's two retired jersey numbers -- 8 and 24 -- hang high above the arena where he became the third-leading scorer in league history until Lakers star LeBron James passed him on the night before Bryant's death.

Bryant's death caused an outpouring of grief across Los Angeles, where he remained the city's most popular athlete into retirement. Dozens of public memorials and murals have been installed around the sprawling metropolis, and thousands of fans gathered daily outside Staples Center to commiserate after the crash.

| MORE COVERAGE: Kobe and Gianna Bryant shared love of basketball and skills on the court 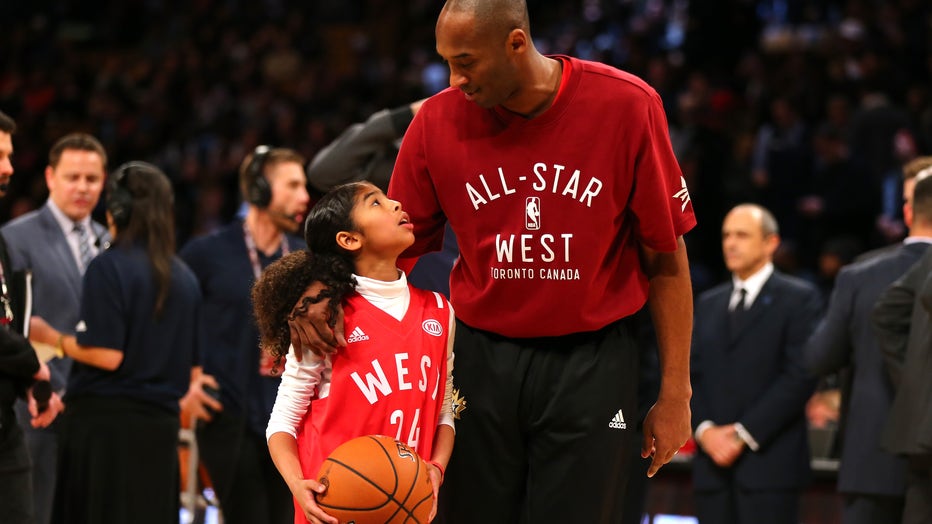 TORONTO, ON - FEBRUARY 14: Kobe Bryant #24 of the Los Angeles Lakers and the Western Conference warms up with daughter Gianna Bryant during the NBA All-Star Game 2016 at the Air Canada Centre on February 14, 2016 in Toronto, Ontario. NOTE TO USER: Us

Symbolic meanings will run throughout the ceremony, which will be held on a 24-foot-by-24-foot stage. Vanessa Bryant, Kobe's wife and Gianna's mother, chose Feb. 24 as the date in honor of the uniform numbers of Kobe and Gianna, who wore No. 2 on her youth basketball teams.

A private funeral was held for Kobe and Gianna Bryant in Orange County on Feb. 7.