ROSEVILLE, Mich. - Matt Schellig, one of Michigan's most esteemed cooks would like his trophy back.

The famed culinary expert who was awarded "Chef of the Year" by the Michigan Chefs de Cuisine Association (MCCA) in 2019 has filed a police report in hopes of getting his trophy back.

Instead, all he's received is a mysterious note with a braggart tone and a photo of his trophy with its newest owner.

"I'm floored. I don't know what to tell you. It doesn't make sense to me," Schellig said. "Somebody's pretty brave. I'll give them that."

Matt Schellig, a chef and program director at Dorsey Culinary Academy who won a Chef of the Year award, had his trophy stolen last December. He later received a note in the mail from the thieves.

The 44-year-old, who works as the program director at Dorsey Culinary Academy received the Milos Trophy last September after a rigorous nomination process. Schellig had big plans for the award, which honors Michigan's first chef to reach Master Chef status.

The team was going to show off the 35-pound accolade around the state.

"The big plan was to Stanley Cup this thing and take it all over town, get pictures of it," he said.

Instead, on December 20 while Schellig was working at a homeless shelter in Detroit, the trophy was snatched from its display case.

"Couple days later, I actually came into work with some students and I walking the students out and turning back into the building, I noticed there was a big empty space in the trophy case," he said.

As if stealing the trophy wasn't bold enough, the thieves instead mailed a taunting letter stating "We had to take it!" when a photo showing the trophy. Standing next to the award is someone dressed in a chef attire. Their face is framed outside the photo.

So who took Schellig's trophy and what reasons might be motivating this bit of larceny? The chef has some theories.

"Somebody who might have worked here that was let go nine days earlier might be involved," he said. 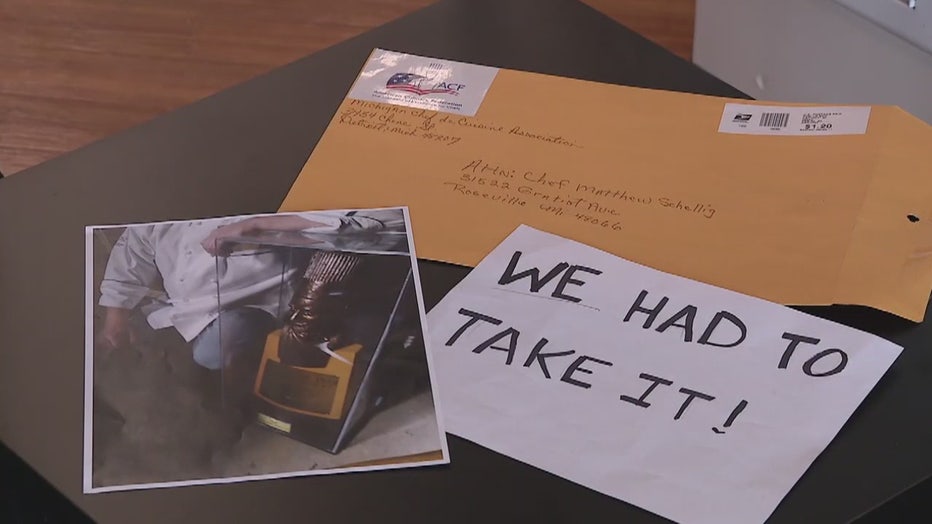 The MCCA awards one chef every year with the honor. All past winners have their names printed on the trophy. Both are reasons that Schellig says the thieves didn't just rob him - but everyone.

"It's a shame. They didn't steal it from me. They stole it from us. That's a piece of our tradition," he said.