Donald Trump was in Michigan as miles away he was making history as the third president ever impeached.

BATTLE CREEK, Mich. - President Donald Trump blasted the Democratic-led effort to impeach him, telling supporters in Michigan just as the House voting was getting underway on Wednesday night that, “by the way, it doesn't really feel like we're being impeached."

He says the country is doing better than ever, adding, “We did nothing wrong, and we have tremendous support in the Republican Party like we've never had before."

Trump is capping a historic day for the nation by taking his case to a swing state that narrowly voted for him in the 2016 election. 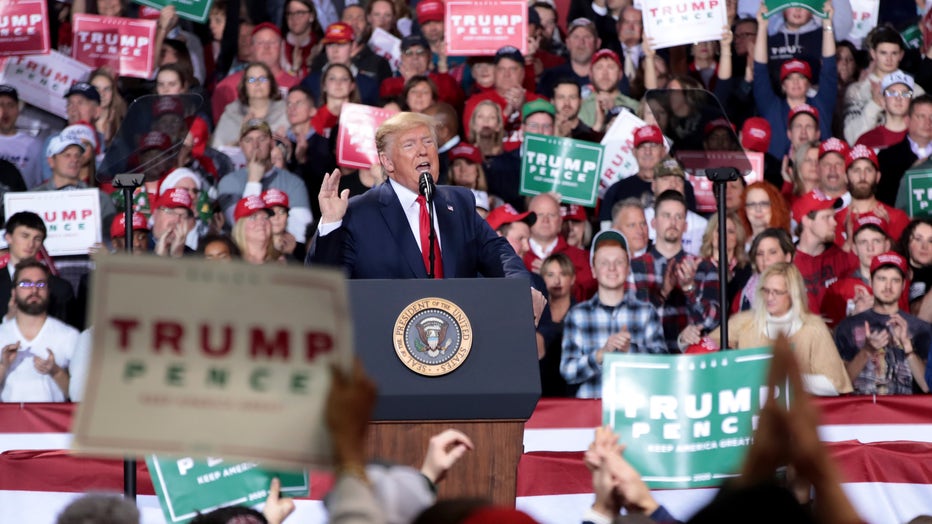 BATTLE CREEK, MICHIGAN - DECEMBER 18: President Donald Trump speaks at a Merry Christmas Rally at the Kellogg Arena on December 18, 2019 in Battle Creek, Michigan. While Trump spoke, the House of Representatives was voting on two articles of impeachm

Trump is speaking as the House started to vote on two articles of impeachment. Democrats say the president threatened the integrity of U.S. elections and endangered national security in his dealings with Ukraine.

During his speech in Battle Creek, Trump started the 'Merry Christmas Rally' by saying he was surrounded and patriots and he was happy to hear people say Merry Christmas.

"Did you notice everyone is saying Merry Christmas again?" Trump asked, which was received with roars of applause.

Before Trump took the stage, Vice President Mike Pence said that he was going to come out after the House vote. In a surprise move, Trump walked out at the same moment that the House started the historic vote.

Aides had said Trump would wait to see the House vote before coming out to address the rally, but he appeared onstage early and promised “the best speech you've ever heard" in a swing state that narrowly voted for him in 2016.

"They want to impeach me, they want to do worse than that," Trump said, to boos. "The country is doing better than ever before."

Whitmer told the crowd he was happy to be in Michigan and then took a shot at Gov. Gretchen Whitmer, who ran on the 'Fix the Damn Road' platform.

In the wide-ranging speech, President Trump touted the military, criticized former President Barack Obama, Hillary Clinton, his Democratic challengers for president, and he seemed to take credit for Ford hiring and investing $1.75 billion in the Detroit area.

"A lot of car companies are going to Michigan. Sometimes they will go south. I want them all in this country. (Michigan car companies) are doing well I'm proud, very proud of you. I have the greatest economy in the history of this country," President Trump said.

Trump mostly touted what he's done in the past three years, criticized Democrats, and addressed the firing of former FBI head James Comey.

"Comey is another beauty. Did I do a great job when I fired his ass? That was like throwing a rock at a hornet's nest. Did that explode?" Trump said, to a raucous applause from the crowd.

A little less than an hour into the speech, Trump addressed the impeachment voting, applauding the 198 Republicans who voted against impeachment. He also credited the three Democrats who joined the no votes.

While Trump and his aides have tried to brush off the significance of the vote — noting there is little chance he will be convicted by the Republican-controlled Senate and removed from office — allies nonetheless acknowledged that Trump has been angry over the stain that impeachment will leave on his legacy.

Trump insisted multiple times that he did nothing wrong.

"You are the ones obstructing justice. They are bringing pain. What they have done with this perversion. What has he done wrong? They don't even have any crime. I am the first person ever impeached and there is no crime. They are calling it impeachment-lite. I don't know about you, but I am having a great time," he said.

Trump said, by making the vote in favor of impeachment, Democrats have cheapened the impeachment process.

Later in the speech, the President was going after several democrats when he turned to Debbie Dingell. He said her late husband, Congressman John Dingell, might be "looking up" as opposed to "looking down". Then he adds "Maybe."

After a little more than two hours, Trump finished his speech with the 2020 campaign slogan "we're going to keep America Great", then walked off the stage to "You Can't Always Get What you Want", an apparent reference to Democrats.