WASHINGTON (AP) - President Donald Trump declared Wednesday that the U.S. is “very, very ready” for whatever the coronavirus threat brings, and he put his vice president in charge of overseeing the nation's response.

Trump sought to minimize fears of the virus spreading widely across the U.S., saying, “I don't think it's inevitable.”

But standing next to him at a White House news conference were health authorities who reiterated that Americans need to get ready for what could become a wider outbreak requiring such steps as school closures.

“Our aggressive containment strategy here in the United States has been working and is responsible for the low levels of cases we have so far. However, we do expect more cases,” said Dr. Anne Schuchat of the Centers for Disease Control and Prevention.

More than 81,000 cases of COVID-19, an illness characterized by fever and coughing and sometimes shortness of breath or pneumonia, have occurred since the new virus emerged in China.

The National Institutes of Health's top infectious disease chief cautioned a vaccine won't be ready for widespread use for a year or more — but said the virus might return, so researchers have to push ahead. 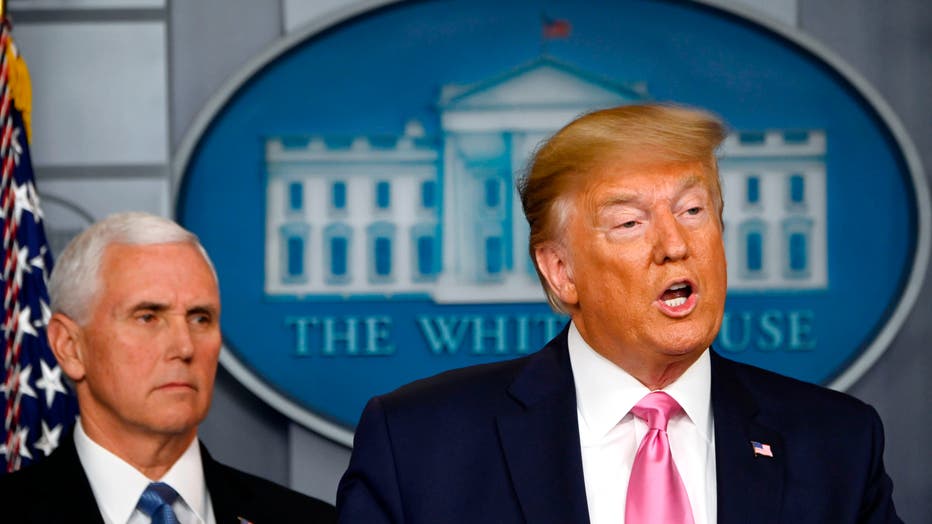 US President Donald Trump, flanked by Vice President Mike Pence (L), holds a news conference with members of the Centers for Disease Control and Prevention(CDC) on the COVID-19 outbreak at the White House on February 26, 2020. (Photo by ANDREW CABALLERO-REYNOLDS/AFP via Getty Images)

NIH's Dr. Anthony Fauci called it “quite conceivable” that the virus will “come back and recycle next year. In that case, we hope to have a vaccine.”

Trump said Vice President Mike Pence will be working with CDC, NIH and other government agencies to coordinate the response. In previous outbreaks, the White House has appointed a “czar" to pull together the different departments' work.

“We're very, very ready for this, for anything,” even if it's “a breakout of larger proportions,” Trump told a news conference.

The U.S. announced a 15th case of coronavirus Wednesday, bringing the total number of infected people in the country to 60. No details were released immediately on the newest case. But the higher count includes people who traveled back from outbreak areas in Asia: three who were evacuated from the central China city of Wuhan and 42 Americans who were evacuated from the Diamond Princess cruise ship docked in Japan.

On Capitol Hill, senior lawmakers called for a bipartisan spending package that would give federal, state and local officials more resources. Trump had requested $2.5 billion to fight the virus; Senate Democratic Leader Chuck Schumer of New York countered with an $8.5 billion proposal.

Trump told reporters he was open to spending “whatever's appropriate.”

Republican and Democratic lawmakers alike have questioned whether Trump's original request is sufficient.

House Appropriations chairwoman Nita Lowey, D-N.Y., said it's premature to put a price tag on the package. “We’re working on it and we’ll have a number but I’m not sure it’s going to be the number that Schumer’s proposing," said Lowey, adding that she's working with lawmakers of both parties.

Aides said the House measure is likely to be unveiled next week. Bipartisan “four corner” meetings — Democrats and Republicans in both the House and Senate — began Wednesday, a House Democratic aide said, with a bipartisan bill the goal.

Schumer has been harshly critical of Trump's response to the outbreak, and his request — announced before the Democratic-controlled House Appropriations Committee has weighed in — rankled some Democrats hoping for quick, bipartisan action to address the crisis.

Arriving back in the U.S. early Wednesday, Trump immediately began to counter critics who say he should have acted sooner to bolster the federal response to the coronavirus.

Trump has wondered aloud if Health and Human Services Secretary Alex Azar is the right person to lead the administration’s response. The White House had considered naming a virus czar, but was not sure that was the right route, said a person familiar with the discussions. Azar himself was said to be supportive of naming a czar.

Among those under consideration for such a post: Former Food and Drug Administration Commissioner Scott Gottlieb. The person spoke on condition of anonymity to discuss private deliberations.

White House press secretary Stephanie Grisham was also pushing back. Grisham retweeted a CDC post that said “there is currently no reported community spread” of coronavirus in the U.S.

This week, the NIH received a shipment of test doses of a vaccine candidate from Moderna Inc., in preparation for first-step safety testing in a few dozen people aimed to begin by April. But Fauci cautioned reporters that in a best-case scenario, "you’re talking about a year to a year and a half” before any vaccine would be ready for widespread use.

Fauci said that while only a few cases have turned up in the U.S. from travelers outside the country, “we need to be able to think about how we will respond to a pandemic outbreak.”

“It's very clear. If we have a global pandemic, no country is going to be without impact,” Fauci said.

A pandemic involves the continual spread of sustained transmission from person to person in multiple regions and hemispheres throughout the world simultaneously, Fauci noted.