ORION TWP., Mich. (FOX 2) - GM workers have been off the job for eight days now.

While talks continue at the negotiation table, it is business as usual for those marching outside the closed plants.

GM workers have been off the job for eight days now.

At the GM plant in Orion Township, the 750 members of United Auto Workers Local 5960 walk the line in shifts, spurred on by a strong support team.

“It’s been overwhelming," said Gerald Lang, VP, Local 5960. "We keep continuing on the line. Pizza, chips, snacks, whatever. There is a huge backing behind what we are doing right now, so that keeps us going.”

"The horns that are honking and the people that are just randomly stopping and dropping off food," said Louis Rocha, president Local 5960.

As the strike enters week two, members come to the UAW local president looking for some insight as to what is happening at the negotiation table.

“It’s always a good thing when talks continue," Rocha said. "During the weekend we received a letter that said talks continued. There is a lot speculation going on, I can’t comment on that. Who knows what is going on we all want this to hurry up and end. We all want an agreement.”

They are aware the longer it lasts to bigger the impact.

“Right now the supplier chain is getting hit," Lang said. "There is 4,000 workers in Saginaw that just got laid off, in Local 699 where I came from. We’re finding other small suppliers that are only making $14, $15 an hour that are getting laid off, that may not even have the opportunity to get full unemployment benefits.”

Among the list of demands are fair wages, health care, profit sharing,.'; and a defined path for temporary workers. 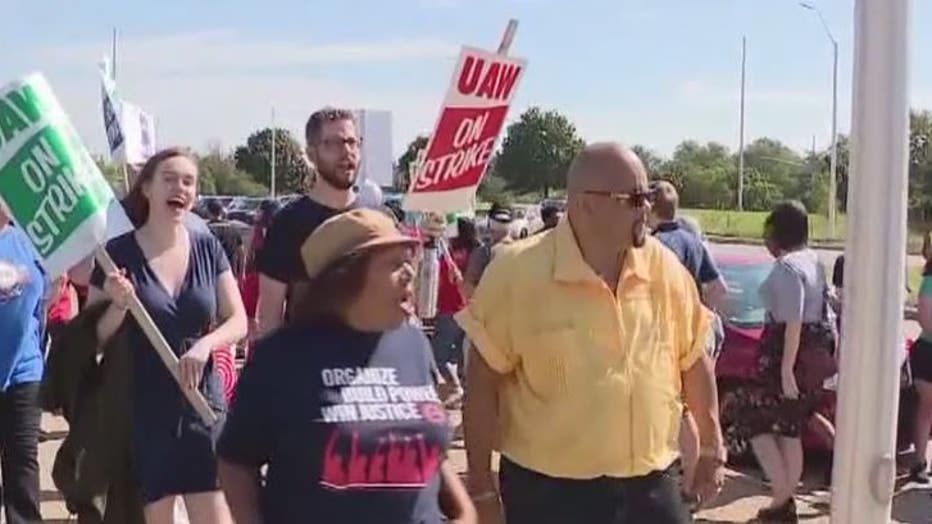 “I got a nephew that works at Flint truck and bus," Lang said. "He’s a two-year temp now.”

It’s that last one, the defined path that seems to be a definite sticking point when it comes to getting a deal that can live with. And for Gerald Lang, its personal.

“He’s scared and frustrated, he's waiting for the day and like I said, GM dangles that carrot," Lang said.

Among the workers out here on the picket line the feeling remains We gave up a lot for GM, its time for GM to give something back to them. The question is if, and when.