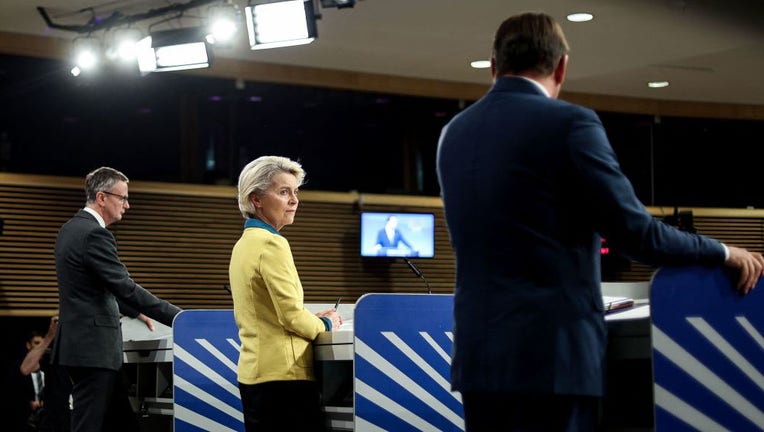 The executive arm of the European Union recommended Friday that Ukraine be granted candidate status to one day join the 27-nation bloc.

The promise of membership in a union created to safeguard peace on the continent holds deep symbolism for the nation at war. But it is only the first step in a process that could take decades.

And it didn’t silence the guns and artillery that continue to kill civilians and flatten cities as well as sending millions fleeing from their homes since Russia launched its invasion of its neighbor on Feb. 24.

Russia pressed its attacks on cities in Ukraine’s eastern Donbas region, leaving desperate residents struggling to make sense of what the next years hold for them.

"We are old people, we do not have a place to go. Where will I go?" asked Vira Miedientseva, one of the elderly residents grappling with the aftermath of at attack Thursday in Lysychansk, which lies just across the river from Sievierodonesk, a key focus of battles in recent weeks that Russians have nearly captured.

President Joe Biden announced an additional $800 million in military aid to help Ukraine fight the Russian invasion in remarks on April 21, 2022, from the White House.

The European Commission recommendation is the first step on the long road toward membership and comes a day after four European Union leaders vowed to back Kyiv’s candidacy. The recommendation will be discussed by leaders of the 27-nation bloc during a summit next week in Brussels. Launching accession talks requires unanimous approval from all member countries.

The war has increased pressure on EU governments to fast-track Ukraine’s candidate status. But the process still is expected to take years, and EU members remain divided over how quickly and fully to open their arms to new members.

RELATED: US sending $1 billion more in aid to Ukraine

— The Ukrainian navy claimed Friday that it struck a Russian boat carrying air defense systems to a strategic island in the Black Sea. In a statement on social media, the navy said that the Vasily Bekh was used to transport ammunition, weapons and personnel to Snake Island, which is vital for protecting sea lanes out of the key port of Odesa. It did not say how much damage it inflicted with the strike.

Snake Island, located some 35 kilometers (20 miles) off the coast, figured memorably early in the war when Ukrainian border guards stationed there defied Russian orders to surrender, using colorful language that later became a rallying cry. There was no immediate reaction from Russian authorities about the Ukrainian claim.

RELATED: 2 US veterans from Alabama reported missing in Ukraine