DETROIT - As the auto workers strike waded into week three territory with little updates on progress, state and federal officials are joining the blue-collar act of civil disobedience.

On Sunday, Michigan Secretary of State Jocelyn Benson joined picketers on the lines, along with several clergy members as part of Solidarity Sunday. On the same day, Amy Klobuchar and Elizabeth Warren, both senators running for president in 2020 spoke at a separate event put on by the United Food and Commercial Workers.

"We want to see our companies be prosperous but in a way where our workers get a big chunk of that prosperity as well," said Warren.

"There's this old saying in politics 'if you're not at the table, you're on the menu,'" said Klobuchar.

As the UAW strike against General Motors bleeds into its third week, high profile presidential candidates and public officials from Michigan are wading into the fray. As Senator's Klobuchar and Warren spoke at a United Food and Commerical Workers (UFCW) event over the weekend, Secretary of State Jocelyn Benson joined the picketers on Solitary Sunday.

Since the strike's announcement, most headlines that have breached the national mediascape have come when presidential candidates joined the fray. On Sept. 22, former Vice President Joe Biden and Warren marched with picketers. Senator Bernie Sanders joined the strikers a few days later.

It's now the 15th day and the second-longest strike in GM-UAW history. The issues on the table are health care, job security, and wages. To help buoy UAW strikers, picketers receive a $250 stipend in substitute pay from the union.

"It's already in the bank, it's all taken care of. We're just waiting for better days and get the resolution of this," said Peter Harris, a striking UAW worker.

However, the number one issue at the bargaining table is the status of temporary workers. Many part-time employees could be working on the line for years without becoming a permanent employee. 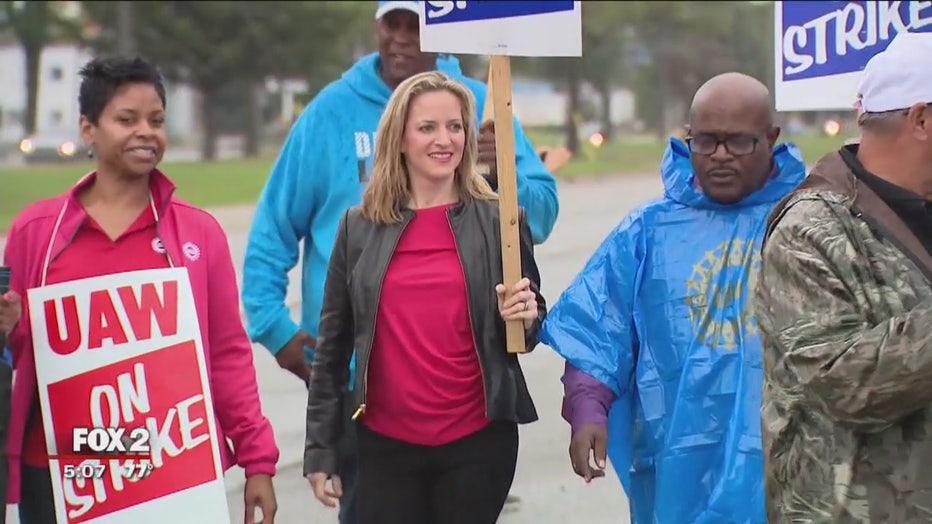 "I'm like fighting for somebody else. It's not a lot in this for me," said Leon Harvey, another striking UAW employee. "It's going kind of slow, but I have faith in the leadership - both GM and the UAW."