SOUTHFIELD, Mich. (FOX 2) - The Michigan group Unlock Michigan submitted 539,000 signatures Friday to repeal a law that has given Gov. Gretchen Whitmer broad emergency powers during the coronavirus pandemic, demanding that the veto-proof initiative be put before the Republican-led Legislature before year's end.

Unlock Michigan needs roughly 340,000 valid voter signatures for the bill to qualify and has a 200,000 cushion. It said state election officials can certify the measure in 60 days — a figure that has been questioned by Secretary of State Jocelyn Benson, who has said it could take 105 days and noted the deadline is 2022.

That is when the legislation would go to voters if lawmakers did not pass it. 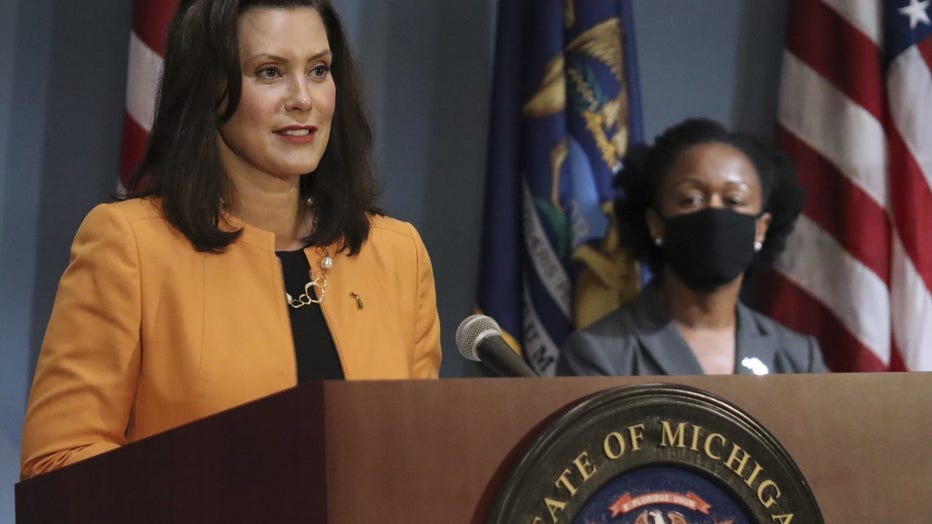 Gov. Gretchen Whitmer speaks in Lansing about COVID-19 in Michigan. A group says it has enough signatures on a ballot drive to revoke emergency powers by the governor.

Republican organizers said they did not include about 1,200 signatures that were collected by circulators after they were trained on deceptive, potentially illegal tactics by a “liberal political operative.”

State Attorney General Dana Nessel, a Democrat, is investigating the ballot drive. The Democratic governor has opposed the initiative, saying she has saved lives due to a 1945 law allowing her to unilaterally extend a state of emergency and therefore issued underlying orders to curb COVID-19.

The public supports her handling of the pandemic, according to polling, and disapproves of how Trump has managed the crisis. The two have sparred several times. At a large campaign rally outside Saginaw on Thursday, Trump told Whitmer to "open up your state" said Michigan would be better off if it had a governor "who knew what the hell she was doing" -- hours after she called him the "biggest threat" to Americans for purposely downplaying COVID-19.

Republican lawmakers initially agreed to lengthen a state of emergency through April but balked at extending the declaration again without the governor agreeing that all future stay-at-home measures would be enacted with bipartisan legislation. The Legislature sued in May, when its GOP leaders also began supporting a veto-proof initiative in case they lose in court.

She is urging people not to sign the petition. She said it would jeopardize Michigan's progress. The state's per-capita rate of new cases over the last two weeks ranks lower than 36 states. She has let schools and many businesses reopen since the curve was flattened, subject to safety rules.

"These are authorities that we have conferred upon our chief executive in extraordinary circumstances to keep people safe," she said. "Each governor since 1945 has had these same powers, and I'm going to fight to make sure that every governor after me has these powers if, God forbid, they find themselves in a situation where they have to be used."