FOX 2 - Former Governor and Energy Secretary for the  US, Jennifer Granholm was back in Michigan Thursday. She granted FOX 2 a an exclusive 1-on-1 interview on a day when the leaders of GM, Ford and Stellantis are meeting with President Biden at the White House.

US Energy Secretary and former Governor Jennifer Granholm 1-on-1

Former Governor and energy Secretary for the US, Jennifer Granholm was back in Michigan Thursday.

"For Michigan, it's going to mean over $7 billion in investment in highways here," she said. "Talk about fixing the damn roads - this is going to be significant. It's $536 million dollars for bridges."

Seven thousand miles of highway in Michigan are broken.

"So this is a day where they sent me to Michigan, and the Big Three are at the White House, to really amplify the notion that this is a commitment to electrifying our transportation sector," Granholm said. "And what that's going to mean, is jobs. Jobs in Michigan, in particular.

"We have to make sure we can create the guts to that electric vehicle. It is the battery, the drivetrain, all of that. All of the supply to create an electric vehicle, this is going to mean jobs here, good-paying jobs."

Energy Secretary Jennifer Granholm is a big part of a massive push behind the $1 trillion bipartisan infrastructure package.

FOX 2: "When you drove here today, what did you notice? What really concerns you about what you are seeing?"

"Clearly, we need to invest in the bones of our nation - and that means the roads," Granholm said. "That means the bridges, and actually, we're here in Oakland County, and I was noticing there was a beautiful bridge that we just drove over to get here, but not all bridges are like that.

"I was noticing what the grid looks like, the grid, in Michigan and across the country, are built on wooden poles in the 1950s, with wire hanging off the top - in the face of what I will repeat - in intensifying weather and climate events, because of climate change. We can't have a grid that is so exposed and so old."

So where else would the dollars flow? Some of the cash would go to The state's auto industry, manufacturing sector, and
Create jobs in clean energy.

Back to EV technology. Do we have enough juice to make it happen in our electrical grid even support that type of UV infrastructure? 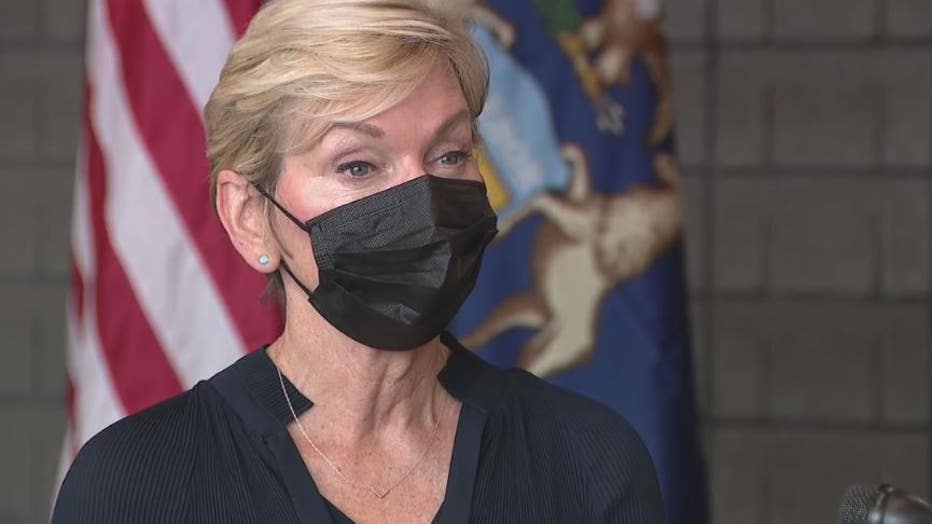 "That's a great question," she said. "So today the president is at the White House, with the Detroit three, talking about getting 50 percent of the electric vehicle sold, electric. So all of those electric vehicles are going to need to have additional capacity on the electric read, to make sure we are able to electrify them.

"What we're going to do is invest in the grid as well, the bipartisan infrastructure bill that we are talking about invests about $25 billion into adding capacity to the grid but also making it more resilient and protecting it from hacking for cyber reasons."

FOX 2: "How serious is that cyber threat right now to all of our infrastructure?"

"It's a very serious threat. Individuals and businesses have to take this seriously," she said.

FOX 2: "How quickly will the dollars hit the streets of Michigan?"

"Once that happens and the president signs it, then I, we can assume, in late fall or early winter, certainly before the end of the year, the money can start to flow."