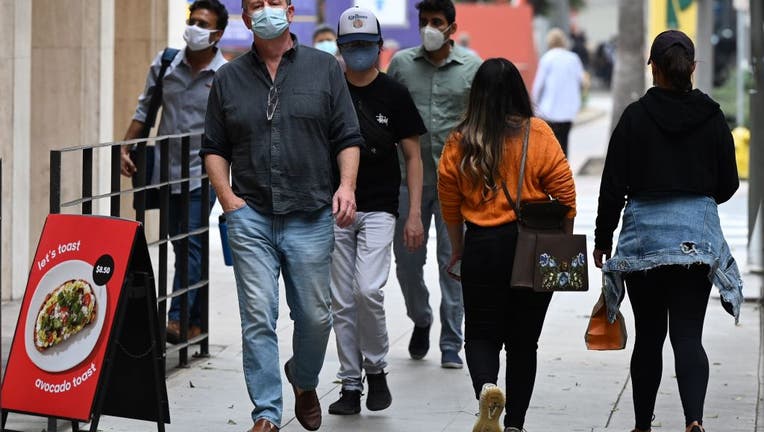 FILE - People wearing masks to prevent the spread of coronavirus walk in downtown Los Angeles, California, November 5, 2020 as the country awaits the result of the Nov. 3 U.S. presidential election.

The United States recorded more than 100,000 new COVID-19 cases for a second day in a row, according to data collected by Johns Hopkins University.

New confirmed cases of the novel coronavirus in the U.S. have climbed to an all-time high of more than 86,000 per day on average, in a glimpse of the worsening crisis that lies ahead for the winner of the 2020 presidential election.

Cases and hospitalizations are setting records around the country just as the holidays and winter approach. Daily new confirmed coronavirus cases in the U.S. have surged 45% over the past two weeks, to a record seven-day average of 86,352, according to data compiled by Johns Hopkins University.

Deaths are also on the rise, up 15 percent to an average of 846 deaths every day.

According to IHME, part of the University of Washington’s School of Medicine, nearly 770,000 lives worldwide could be saved between now and Jan. 1 through coronavirus preventive measures suggested by the CDC, including mask-wearing and social distancing.

The total U.S. death toll is already more than 232,000, and total confirmed U.S. cases have surpassed 9 million. Those are the highest such totals in the world, and new infections are increasing in nearly every state.

Rural counties in states such as Montana, the Dakotas, Nebraska, Kansas, Iowa and Wisconsin — the kinds of areas that often have lower rates of adherence to social distancing, mask-wearing and other public health measures, and have been a focal point for much of the latest surge in cases.

Taking note of the contrast, state health officials are pausing for a moment of introspection. Even as they worry about rising numbers of hospitalizations and deaths, they hope to reframe their messages and aim for a reset on public sentiment now that the election is over.

“Public health officials need to step back, listen to and understand the people who aren’t taking the same stance” on mask-wearing and other control measures, said Dr. Marcus Plescia of the Association of State and Territorial Health Officials.

“I think there’s the potential for things to get less charged and divisive," he said, adding that there’s a chance a retooled public health message might unify Americans around lowering case counts so hospitals won’t get swamped during the winter months.

Trump has ignored the advice of his top health advisors, who have issued increasingly urgent warnings in recent days about the need for preventive measures, instead holding rallies where face coverings were rare and falsely suggesting that the pandemic is waning.

Biden has rarely been seen in public without a mask and made public health a key issue.

Trump and Biden discuss the the possibility of the Supreme Court overturning the Affordable Care Act.

Federal health officials have said they believe a vaccine could get emergency use authorization before the end of the year. The first limited supplies of doses would then be immediately distributed to the most vulnerable populations, which is likely to include frontline health care workers. Doses would then gradually become more widely available.

The timeline hinges on having a vaccine that’s shown to be safe and effective, which experts note is not yet a certainty.