WASHINGTON DC - President Donald Trump on Tuesday will deliver his State of the Union address on the eve of his likely impeachment acquittal and in the aftermath of the chaotic first votes of the race to replace him.

The first president to run for reelection after being impeached, Trump aimed to use his nationally-televised speech to lay out his record as the rationale for a second term amid suspense about whether he would address the charges against him. >>Watch below, mobile app users tap here.<<

He will speak from the well of the House of Representatives, on the opposite side of the Capitol from where the Senate one day later is expected to acquit him largely along party lines.

“This is a president with an enormous sense of drama and a background in television who understands that the setting gives him an opportunity," said presidential historian Michael Beschloss. “This is an opportunity to set the course for reelection.”

White House aides have promised an optimistic speech that will look past the impeachment trial that has consumed Washington in favor of a recitation of accomplishments and promises.

But Trump often veers from his script and may not be able to resist using the moment to claim exoneration and settle scores. And even in the moments when Trump has struck a tone of bipartisanship and cooperation, he has consistently returned to his scorched earth rhetoric within days.

Excerpts of the president’s speech were released to the media.

“Three years ago, we launched the Great American Comeback. Tonight, I stand before you to share the incredible results,” Trump is expected to say. “In just three short years, we have shattered the mentality of American Decline and we have rejected the downsizing of America’s destiny. We are moving forward at a pace that was unimaginable just a short time ago, and we are never going back!”

Even for a Trump-era news cycle that seems permanently set to hyper-speed, the breakneck pace of events dominating the first week of February offered a singular backdrop for the president's address.

Yet Trump told TV anchors at a midday meal that his address would be “extraordinarily low key.”

“The vision I will lay out this evening demonstrates how we are building the world’s most prosperous and inclusive society – one where every citizen can join in America’s unparalleled success, and where every community can take part in America’s extraordinary rise,” the speech’s excerpt says. “From the instant I took office, I moved rapidly to revive the U.S. economy —slashing a record number of job killing-regulations, enacting historic and record-setting tax cuts, and fighting for FAIR and RECIPROCAL trade agreements.”

Trump is expected to end the speech on a positive note. 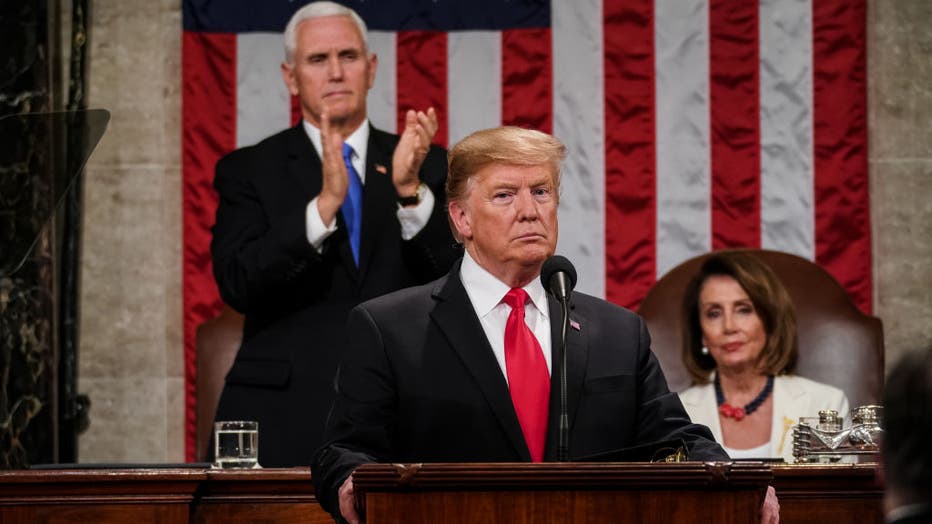 President Donald Trump, with Speaker Nancy Pelosi and Vice President Mike Pence looking on, delivers the State of the Union address in the chamber of the U.S. House of Representatives at the U.S. Capitol Building on Feb. 5, 2019 in Washington, DC. (P

“Our ancestors built the most exceptional Republic ever to exist in all of human history— and we are making it greater than ever before!”

Perched over his shoulder, visible in nearly every camera shot, will be House Speaker Nancy Pelosi, a frequent thorn in Trump's side who authorized the impeachment proceedings that charged the president with abusing the power of his office to push Ukraine to investigate a political foe.

Trump will also stare out at some of the Democrats who have been vying to take his job, although it was unclear if he would weigh in on the confusion in Iowa, where the results of Monday's leadoff caucuses were delayed.

Trump spent the hours before his speech tucked away at the White House, hosting network anchors for lunch while working on final drafts of the address.

He entered the moment on a roll, with his impeachment acquittal imminent, his job approval numbers ticking upward and Wall Street looking strong. Aides played down the possibility that he would use the address to seek vengeance over impeachment.

“They want to hear what the president has done for this country and what he is planning to do for this country, so it will be very forward-facing,” White House press secretary Stephanie Grisham told Fox News early Tuesday.