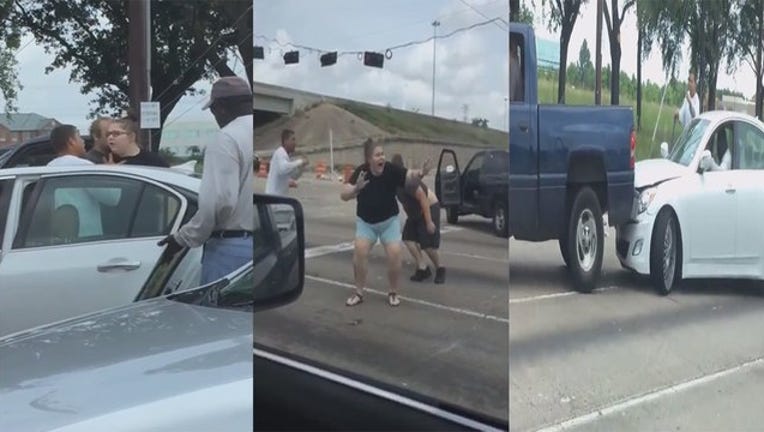 FOX NEWS - They say everything is bigger in Texas. That would include road rage incidents, apparently. A video of a violent roadside confrontation in Houston has quickly gone viral, and now one of the drivers involved is speaking out. The video, which was taken by a bystander, shows a woman and a man who were driving in a truck arguing with two men in a car off Highway 6 near US 290 on Saturday.

The woman yells at the passenger in the car until things boil over and he appears to throw a beverage at her. The truck driver runs up and kicks in one of the car's headlights, which immediately sets off a brawl. The two men from the car batter the truck driver, as the woman screams and tries to stand between them. She ended up being punched in the face as well.

After a few intense seconds, everything appears to calm down, with everyone returning to their respective vehicles. That's when the truck driver suddenly puts his vehicle in reverse and slams into the car before speeding off. The car then takes off after the truck on the highway, and the video ends. The driver of the car spoke to ABC 13 about the incident.

He claimed that the truck was speeding and nearly hit his car. He and the truck driver exchanged words. He said that the driver cursed at him, and it grew more heated from there. After the incident, he said he filed a police report later that evening. The Harris County Sheriff's Office said it's too early to determine what kind of charges could be filed.