DETROIT (FOX 2) - A Wayne County Circuit Court judge's enthusiasm for your right to vote almost trumped your right to a day in court.

A flyer posted outside Judge Bruce Morrow's courtroom is plain - black letters on white paper - the message is pretty plain, too.

"Attention lawyers - effective October 21, 2019, every accused that has a matter before Judge Morrow must show proof of voter registration for his/her case to be heard.  Notify your client in advance."

There's just one problem - you have a right to your day in court regardless of whether you are registered to vote.

"It's an unusual thing for a judge to do," said Larry Dubin.

Dubin is an emeritus professor at the University of Detroit-Mercy Law School.  He received his law degree 53 years ago and is an expert on legal ethics.

He says judges should not put conditions on people charged with crimes that could keep them from getting their day in court.

"It infringes upon a citizen's Constitutional right to be heard, to be present in a courtroom," he said. "But putting that aside, even if the judge's motives were good in wanting people to register, it really is an inappropriate thing to do."

M.L. Elrick called Judge Morrow for an explanation to give him a chance to exercise his First Amendment right to free speech - but he didn't call back.

Wayne County Prosecutor Kym Worthy's spokeswoman would only say: "It has been referred to the chief judge of the Third Circuit."

That's the Honorable Timothy Kenny, who said: "Certainly the notion of encouraging voter registration and participation is a good thing. But there is a better way to do it."

Kenny says he met with Morrow Tuesday.  As a result of the meeting of those legal minds, the court will host a voter registration opportunity once a month in the Frank Murphy Hall of Justice.

Professor Dubin says Morrow's conduct can raise questions about judicial ethics. Morrow is no stranger to scrutiny, in 2014, the Michigan Supreme Court suspended him without pay for 60 days for what it called "a body of judicial misconduct."

Morrow was cited in 10 cases where it thought he undermined judicial confidence in that he is very friendly to defendants.

In one case Judge Morrow gave a defendant convicted of drunk driving less than the limit for a lighter sentence.

In another case, Morrow refused to lock up someone who was convicted of raping a 13-year-old until sentencing in opposition to the law which states they have to be locked up until they are sentenced.

In another case Morrow left the bench, shook hands with the defendant and handed documents to the defense attorneys before the case proceeded. 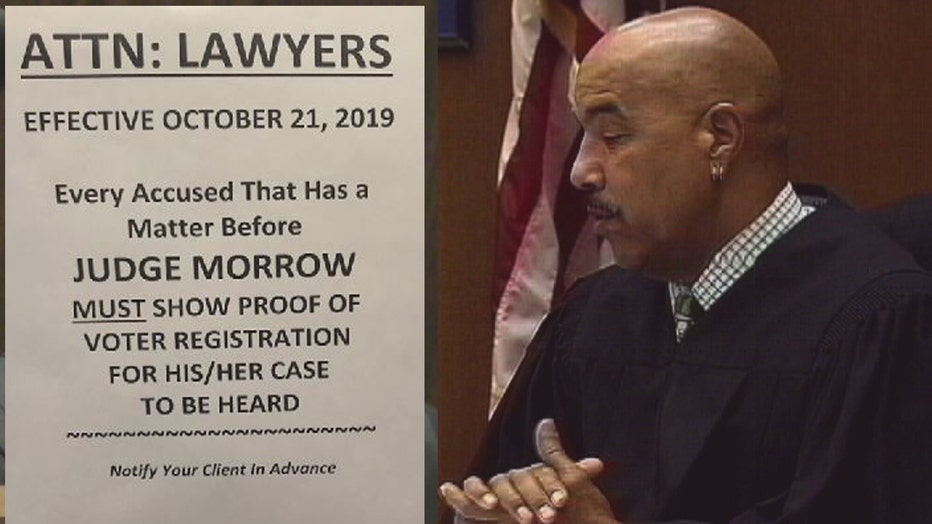