(AP) - A White House physician's comments on Sunday about the health of President Donald Trump amid his coronavirus diagnosis added a new layer of confusion even as the doctor sought to clarify contradictory statements from the day before.

What we know and what we don't know:

WHAT WE KNOW: TRUMP’S MEDICAL CONDITION

Dr. Sean Conley, the president's physician, said Trump was given a steroid dexamethasone after his blood oxygen level had dropped suddenly twice in recent days, but he “has continued to improve” since then. Conley said Trump could be discharged from Walter Reed National Military Medical Center as early as Monday.

Conley said Trump had a “high fever” and a blood oxygen level below 94% on Friday and during “another episode” on Saturday.

Conley was evasive when asked whether Trump’s blood oxygen level had dropped below 90%: “We don’t have any recordings here on that.” The level currently stands at 98%, Trump’s medical team said.

Blood oxygen saturation is a key health marker for COVID-19 patients. A normal reading is between 95 and 100. A drop below 90 is concerning.

Trump's team said Sunday that Trump received oxygen at the White House on Friday. They were not clear on whether he received any Saturday.

Along with a steroid, Trump has been treated with two experimental drugs, doctors said.

On Friday, Trump was given a single dose of a drug that Regeneron Pharmaceuticals Inc. is testing to supply antibodies to help his immune system fight the virus. Trump also has taken two doses of a five-day course of remdesivir, a Gilead Sciences drug currently used for moderately and severely ill patients.

Trump's team said Sunday that Trump is “up and around” and doing well — apparently so well that the president took an impromptu ride in a motorcade Sunday afternoon to wave to supporters outside the hospital. Officials said if things continue to go well, Trump will be able to return to the White House on Monday to continue his treatment. 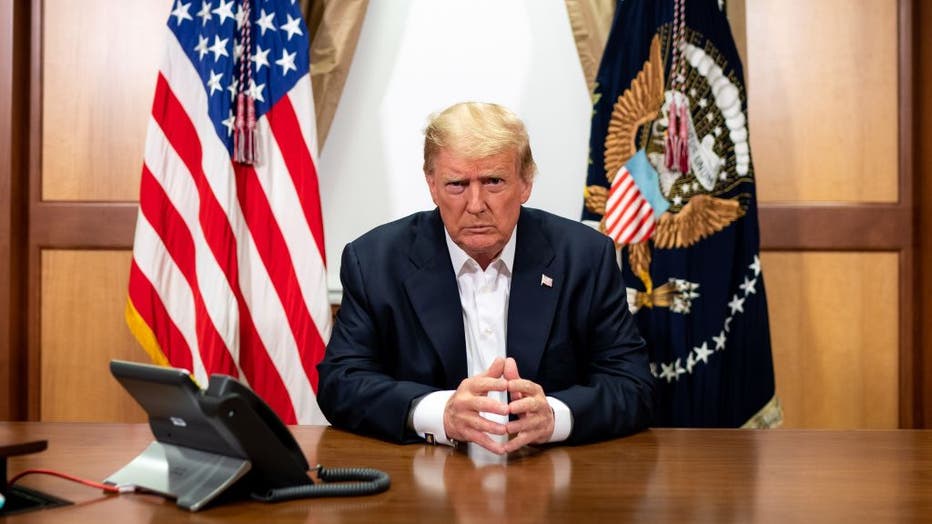 In this handout provided by The White House, President Donald Trump participates in a phone call with Vice President Mike Pence, Secretary of State Mike Pompeo, and Chairman of the Joint Chiefs of Staff Gen. Mark Milley in his conference room at Walt

Trump's medical team continued to dodge many questions Sunday, such as the specific timing of the president’s dip in oxygen and the impact of the disease on his lungs.

Asked repeatedly about what lung scan tests found and whether there have been any signs of pneumonia or other damage, Conley responded: “We’re tracking all of that. There’s some expected findings but nothing of any major clinical concern.”

Conley also hasn't specified where Trump is in the “disease course” of COVID-19. Days seven to 10 typically are a time of higher concern, he said.

As far as the drive-by greeting to supporters, CDC guidelines say that, in general, moving a patient with COVID-19 outside his room should be limited to "medically essential purposes.” The outing suggests to the common observer Trump's condition is not perilous, but medical authorities note that talk of Trump leaving the hospital for home after only a few days doesn't square with information about his treatments.

WHAT WE KNOW: WHEN TRUMP FELL ILL

Trump started showing symptoms by Thursday, a full day before the White House announced what were initially called “mild symptoms.”

The timeline matters as an indication of how transparent Trump, his staffers and doctors are being about the president's health and whether Trump should have known he may have been spreading the virus as he mingled with campaign donors, staffers and others Thursday.

WHAT WE DON’T KNOW: WHEN TRUMP FELL ILL

Conley declined to say when Trump had last been tested before Thursday’s test confirmed COVID-19.

WHAT WE KNOW: HOW TRUMP WAS INFECTED

It's not clear, but attention is focusing on a White House event Sept. 26 introducing Trump’s Supreme Court nominee. Trump gathered more than 150 people in the Rose Garden, where they mingled, hugged and shook hands — overwhelmingly without masks. Photos also show several indoor receptions, where Trump’s nominee, Judge Amy Coney Barrett, her family, senators and others gathered in the close quarters in the White House.

WHAT WE DON’T KNOW: HOW TRUMP WAS INFECTED

There's no way to know for sure if the Rose Garden event was where Trump — who typically shuns a mask and has kept holding big public gatherings during the pandemic — was exposed. The president had a full week of official and campaign events before his hospitalization Friday.

A third Republican senator, Ron Johnson of Wisconsin, announced his positive test Saturday, and he had not attended Barrett’s nomination kickoff.