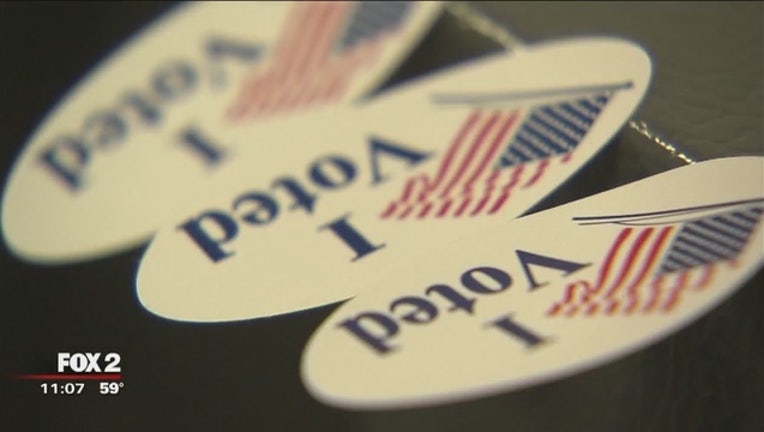 (WJBK) - The second of three proposals Michigan voters will see on their ballot would reform the state's redistricting process.

Under current legislation, lawmakers are the ones who draw the districts and some say that can lead to gerrymandering. Proposal 2 would take that power away from the legislature and put it in the hands of an independent, 13-person commission comprised of Democrats, Republicans, and unaffiliated members.

Beginning in 2021, a group of randomly selected Michigan voters called the Citizens Independent Redistricting Commission would become responsible for redistricting.

Proposal 2 is a constitutional amendment, meaning it would amend the constitution of Michigan. The number of signatures supporters needed to get it on the ballot was 10 percent of the votes cast for governor in the last election -- that's 315,654 signatures.

According to Ballotpedia, the Michigan Board of State Canvassers approved the ballot measure for signature gathering on Aug. 17, 2017. Those behind the measure submitted more than 425,000 signatures just a few months later on Dec. 18. The Board of State Canvassers confirmed that enough valid signatures had been collected on June 20, and the measure was officially approved to appear on the ballot Election Day.

RELATED: What you're voting for: Michigan's ballot measure to legalize marijuana

What Proposal 2 would do

The constitutional amendment would create a 13-member independent commission that would draw districts -- specifically, state senate districts, state house of representatives districts and congressional districts. That power to draw those districts would be transferred from the Michigan Legislature. The last time congressional maps were drawn was in 2011, following the 2010 U.S. Census.

Currently, the Michigan Legislature draws the legislative districts and the governor has the power to veto them. This leads some to complain that the maps are drawn for partisan gain.

What are commissioner requirements

That commission would consist of 13 commissioners -- four Democrats, four Republicans and five independents or members of third parties. Each commissioner would have to be a registered Michigan voter, and it would be required that they are not currently or in the past six years have been any of the following:

It would also be required that a commissioner is not a parent, stepparent, child, stepchild or spouse of anyone listed above. Additionally, for five years after appointment, a commissioner is ineligible to hold a partisan elected office at the state, county, city, village or township level in Michigan. Proponents say the idea is to create a commission of people who have no ties to political figures that may influence their decisions -- hence why it's called an independent commission.

How would commissioners be selected

Because the commissioner would be made of four Republicans, four Democrats, and five independents, the SOS would randomly select 60 applicants from each party and 80 applicants from the pool of non-affiliated applicants. That random selection process would have to use accepted statistical weighting methods to ensure that the pools mirror the geographic and demographic makeup of the state.

The commission would select its own chairperson, make its own rules of procedure, and have procurement and contracting authority, and may hire staff and consultants, including legal representation.

How long would commissioners serve

A commissioner's term will end once the commission has completed it's job for a census cycle but not before any judicial review of the redistricting plan is complete. The term may also end if:

Should any of those things happen, the SOS would fill the vacancy by randomly drawing a name from the remaining qualifying applicants in the selection pool from which the original commissioner was selected.

How would the commission be funded

Under the proposal, the commission would be appropriated no less than 25 percent of the general fund for the SOS for that fiscal year. According to the Mackinac Center for Public Policy, that would be about $4.6 million. The funds would be used to hire consultants, staff and legal counsel. Each of the 13 commissioners would be paid at least 25 percent of the governor's salary, which right now would come out to about $39,825.

Anything the commission didn't spend would be given back to the fund, but if they spent more than they were given -- the state would have to reimburse them. The Citizens Research Council of Michigan estimates that funding for the process would be about $10 million over a 10-year redistricting cycle, which is about .01 percent of the General Fund.

The commission would be required top  report their expenditures and would be subject to an annual audit.

What is the process for drawing maps?

Before drafting anything, the commission would have to hold at least 10 public hearings throughout the state to inform citizens about the redistricting process and who they are as a commission. The public could submit proposed redistricting plans and any other supporting information, like underlying data.

Then the commissioner would develop at least one proposed redistricting plan for each type of district, make them public, hold at least five public hearing throughout the state to discuss the plans with citizens. Additionally, commissioners must not accept money, goods services or anything else with a value of more than $20.

Before taking a vote on a plan, the commission must ensure that the plan is tested using appropriate technology. They must also provide public notice of each plan that will be voted on and at least 45 days for public comment.

At least seven members' approval would be required to pass a redistricting plan -- at least two Republicans, two Democrats, and two members not affiliated with the major parties. After passing a plan, the commission must publish a report that explains their reasoning behind the plan. The new plan would become law 60 days after it's published.

What are the requirements for a district?

The text of the ballot measure directly lays out how the districts should be determined. They must:

- Have equal population and comply with the Voting Rights Act and other federal laws
- Be geographically contiguous
- Reflect the state's diverse population and communities of interest, including populations that share historical or cultural characteristics or economic interests
- Not provide an advantage to any political party
- Not favor or disfavor an incumbent elected official or a candidate
- Reflect consideration of county, city and township boundaries
- Be reasonably compact

The committee behind Proposal 2 is called Voters Not Politicians, also known as Yes on 2, and the founder of Count MI Vote Katie Fahey is the executive director. According to their website, "Politicians draw voting maps that directly benefit themselves, instead of putting the interests of voters or communities of Michigan first. It's called gerrymandering and it's a real problem in Michigan. Voters Not Politicians is a nonpartisan, grassroots group working to pass Proposal 2 that will fix Michigan's broken redistricting process."

Michigan is getting significant attention from anti-gerrymandering advocates, even as national Democratic and Republican groups are pouring millions of dollars into state races seeking to ensure they have officeholders in position to influence the next round of redistricting, in 2020. A Democratic redistricting group led by former U.S. Attorney General Eric Holder recently announced a $250,000 donation to bolster Michigan's ballot proposal. The money will aid Voters Not Politicians, whose organizers successfully qualified the constitutional amendment for the November ballot.

Holder and other backers of the proposal say Michigan has an unfair system that puts politicians in the position of picking their constituents. They point to electoral districts that are drawn so twisted they'd make a pretzel jealous as evidence that the map-making process is so manipulative that it challenges representative democracy.

The National Redistricting Action Fund, a nonprofit affiliate of the National Democratic Redistricting Committee, gave $250,000 because they say the measure would put people into government "who are more responsive to the people they are supposed to represent."

Citizens Protecting Michigan's Constitution filed a lawsuit in the Michigan Court of Appeals on April 25 to keep the measure off the ballot, questioning if the ballot measure would violate the state's prohibition on initiatives that change the fundamental operation of state government, according to Ballotpedia. On June 7, the court ruled in a unanimous decision that the initiative was OK for the ballot. Citizens Protecting Michigan's Constitution appealed the ruling to the Michigan Supreme Court, which ruled in a 4-3 decision to keep the measure on the ballot.

A conservative group called Protect My Vote is using $1.2 million donated by the Michigan Freedom Fund to air TV ads that will run for two weeks through Election Day. They've already released a radio ad that calls the measure a "blank check" for a commission that would draw congressional and legislative lines once a decade. The ad says the constitutional amendment would "cost you an insane amount of money" because there would be "no limits" on the commission's hiring of staff and consultants.

Critics include the Michigan Republican Party, which argues that Voters Not Politicians is a Democratic "front group" that seeks to lure voters into sacrificing their voice in the redistricting process by taking the power away from those elected to the Legislature.

The Citizens Research Council, a nonpartisan public policy research group that takes no side on issues,  points out that the current system leaves decisions to "politicians who can directly benefit from the redistricting process" and that the proposed commission would be required to boost transparency and voter access. However, it also points out that one drawback would be that the commissioners would not be elected but would instead be selected at random and only accountable to one another.

Eric Lupher, president of the Citizens Research Council of Michigan, said he doesn't think the proposed change would provide an advantage to either party, at least in the long term.

The AP's statistical analysis of the 2016 election results found that Michigan's state House districts had one of the largest Republican tilts in the nation. The AP used an "efficiency gap" analysis to measure potential gerrymandering, which is the same statistical tool later cited in a lawsuit that alleges Michigan's legislative districts are unconstitutional.

The analysis also found that Colorado's current district maps benefit Democrats. They won a majority of state House seats in 2016 despite winning fewer statewide votes than Republicans. Courts have stepped in to choose Colorado's district maps three of the last four redistricting cycles, and both parties have been accused of gerrymandering.

A separate statistical analysis conducted for the AP by the Princeton University Gerrymandering Project found the extreme Republican advantages in some states were unlikely to be a fluke. The Princeton analysis found the Republican edge in Michigan's state House districts had only a 1-in-16,000 probability of occurring by chance.

In Missouri's 2016 election, Republicans and Democrats both won their districts with roughly 70 percent of the vote, on average. The difference in margins does not provide evidence that Missouri is gerrymandered, according to the project's findings.

The issue in Michigan has some voter support but isn't settled. A poll published Friday by the Detroit Free Press and other news outlets showed that 48 percent of likely voters were supportive of the proposal, 32 percent were opposed and 20 percent were undecided. The EPIC-MRA survey was done Sept. 21-25 and had a margin of sampling error of plus or minus 4 percentage points.

Redistricting on the ballot in the U.S.

Three other states have redistricting initiatives on this year's ballots and there are ongoing legal challenges to the political boundaries in about a dozen states that claim they are the result of political or racial gerrymandering -- the process by which districts are drawn to favor the party in power.

Two other states where campaigns are underway for changing the redistricting process so it's less partisan -- Missouri and Utah -- are more reliably Republican, at least in presidential races. The third, Colorado, has a reputation for being a swing state in the past several recent election cycles but has a Democratic governor and split control of its legislative chambers.