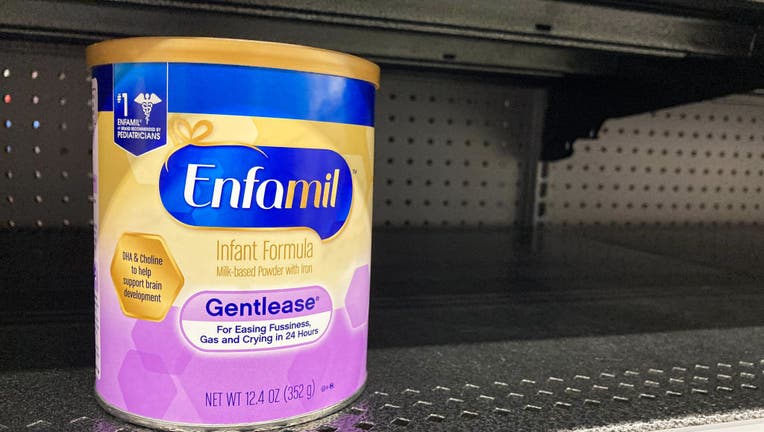 WASHINGTON (AP) - Infant formula maker Abbott says it's reached an agreement with U.S. health officials to restart production at its largest domestic factory, a key step toward easing a nationwide shortage tied to the plant's shutdown earlier this year.

Abbott did not immediately detail the terms of the agreement reached with the Food and Drug Administration, which has been investigating safety problems at the Sturgis, Michigan, facility. The consent decree is a binding legal agreement between the company and the federal government.

MORE: Where can parents get formula?

After production resumes, Abbott has said it will take at least eight weeks to begin shipping new product to stores.

The Biden administration has come under intense pressure over the last week to do more to ease the shortage of formula that has forced parents of infants to go to significant lengths to feed their children.

Abbott's plant came under scrutiny earlier this year after four infants became sick with bacterial infections after consuming powdered formula from the Michigan factory. Two of the babies died.

In February, the company halted production and recalled several brands of formula. Those steps squeezed supplies that were already strained by supply chain disruptions and parents stockpiling during COVID-19.

Over the weekend, the White House offered formula manufacturers and retailers transportation and logistics support, and working with all major formula producers to boost production, including reaching out to their suppliers to encourage them to prioritize production and delivery of formula ingredients.

Deese said the administration "made clear to all of them that federal resources, including transportation and logistics resources, are available and on call and we are prepared to move assets in coordination with them as and when we identify need."

The shortage stems from a February recall by Abbott, the nation’s largest formula maker, that shuttered the company’s Michigan plant and exacerbated ongoing supply chain disruptions among formula makers, leaving fewer options on stores shelves across much of the country. The shortage has led retailers like CVS and Target to limit how many containers customers can purchase per visit and forced some parents to swap and sell formula online.

On Monday, FDA Commissioner Robert Califf told ABC News’ "Good Morning America" that the federal agency is "working really closely with Abbott" to reopen the closed Michigan factory and he expects that "in a very short period of time we’re going to have an announcement about the path forward."

Califf said an announcement is forthcoming about importing baby formula from abroad, noting that the key is making sure the instructions for the formula are in languages that mothers and caregivers can understand.

The FDA warned families against making their own baby formula because it has 30 distinct constituents that have to be in the right amount, otherwise the formula can possibly be dangerous to consume.

Abbott’s voluntary recall was triggered by four illnesses reported in babies who had consumed powdered formula from the Michigan plant. All four infants were hospitalized with a rare type of bacterial infection and two died.

Abbott is one of just four companies that produce roughly 90% of U.S. formula, so its shutdown squeezed already tight supplies.

After a six-week inspection, FDA investigators published a list of problems in March, including lax safety and sanitary standards and a history of bacterial contamination in several parts of the plant.

But Chicago-based Abbott has emphasized that its products have not been directly linked to the bacterial infections in children. Samples of the bacteria found at its plant did not match the strains collected from the babies by federal investigators. The company has repeatedly stated it is ready to resume manufacturing, pending an FDA decision.

"We’ve been seeing lots of questions from the parents who come in the office recently. Primarily, parents whose children are on specialty formulas."

The terms of the consent decree were not immediately clear, including what steps Abbott was taking to remediate issues raised by the FDA or how quickly production at the plant would be restarted.

Even if the facility reopens soon, the FDA will still face scrutiny for its handling of the issues at the plant.

FDA inspectors visited the factory in September for a routine inspection, around the time that the first bacterial infection was reported in an infant. Although inspectors uncovered several violations— including standing water and unsanitary conditions— the FDA did not shut down the plant or issue any formal warning.

Only after several more illnesses were reported did the FDA return to the plant in January, this time finding a history of bacterial contamination in several parts of the plant. Abbott then shut down the facility and recalled several powdered formulas in mid-February.

Congresswoman Rosa DeLauro reported last month that a whistleblower had contacted the FDA in October about unsafe conditions and practices at the plant, including falsifying plant records and failing to properly test formula for contamination.

She and other lawmakers are set to question FDA Commissioner Califf about that issue and others at a hearing scheduled for Thursday.