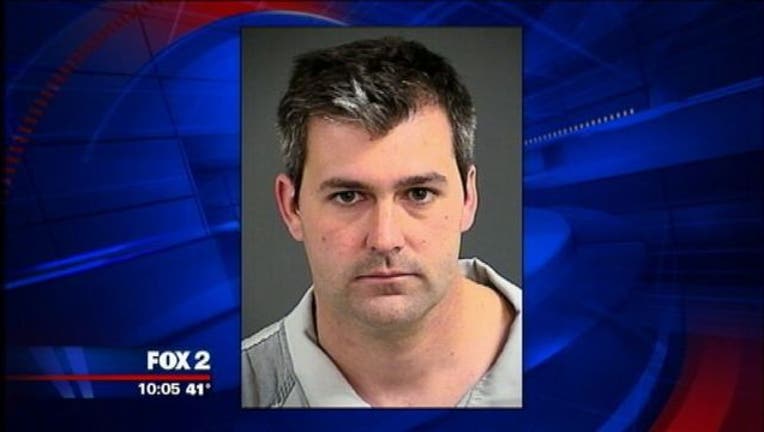 Protests were planned Wednesday in North Charleston, led by a group formed after the fatal shooting of another black man in Ferguson, Missouri.

The video, provided to the dead man's family and lawyer by an unidentified person who shot the footage, shows North Charleston Patrolman Michael Thomas Slager firing eight shots at the back of Walter Lamer Scott as he runs away. The 50-year-old man falls after the eighth shot, fired after a brief pause.

Scott's parents appeared separately on TV shows Wednesday morning, a day after the officer was charged.

Walter Scott Sr. told the NBC "Today Show" that his son may have run because he owed child support and didn't want to go back to jail.

Scott Sr. said that in the video, the officer "looked like he was trying to kill a deer running through the woods."

Judy Scott called the video "the most horrible thing I've ever seen."

"I almost couldn't look at it to see my son running defenselessly, being shot. It just tore my heart to pieces," she said on ABC's "Good Morning America."

Attorneys for the family said the man who shot the video is assisting investigators. The person has not been identified.

North Charleston Mayor Keith Summey announced the charge at a news conference Tuesday. Summy said Slager had made "a bad decision." Authorities said Scott was shot after the officer had already hit the man with a stun gun after a traffic stop Saturday that began over a faulty brake light.

"When you're wrong, you're wrong," Summey told reporters. "When you make a bad decision, don't care if you're behind the shield or a citizen on the street, you have to live with that decision."

Slager, who has been with the North Charleston police for five years, was denied bond at a first appearance hearing Tuesday. He was not accompanied by a lawyer. If convicted, he could face 30 years to life in prison.

The shooting comes amid ongoing public issues of trust between law enforcement and minority communities after such prominent deaths as those of Michael Brown in Ferguson, Missouri, and Eric Garner on Staten Island, New York.

Scott's family and their attorney, L. Chris Stewart, called for calm and peaceful protests. They said the murder charge showed that the justice system is working in this case.

Slager's then-attorney David Aylor had released a statement Monday saying the officer felt threatened and that Scott was trying to grab Slager's stun gun. Aylor dropped Slager as a client after the video surfaced.

The footage was also released to news media outlets.

The video shows an interaction between Scott and the officer, with the two briefly touching near their hands before the shooting.

It shows Scott falling after the shots and then the officer slowly walking toward Scott and ordering the man to put his hands behind his back. When Scott doesn't move, Slager pulls his arms back and cuffs his hands. Then he walks briskly back to where he fired the shots, picks up an object, and returns the 30 feet or so back to Scott before dropping the object by Scott's feet, the video shows.

Gov. Nikki Haley issued a statement saying Slager's actions were not acceptable and did not reflect the state's values or "the way most of our law enforcement officials act."

Republican U.S. Sen. Tim Scott, who is not related to Walter Scott, called the shooting unnecessary and avoidable. "My heart aches for the family and our North Charleston community. I will be watching this case closely," he wrote on Twitter. Tim Scott is the only black U.S. senator from a Southern state.

Walter Scott may have tried to run from the officer because he owed child support, which can lead to jail time in South Carolina until it is paid, Stewart said. Scott had four children, was engaged and had been honorably discharged from the U.S. Coast Guard. There were no violent offenses on his record, the attorney said. Stewart said the family plans to sue the police department.

North Charleston is South Carolina's third-largest city. For years, it battled an economic slump caused by the mid-1990s closing of the Charleston Naval Base on the city's waterfront. The city has bounced back since, largely because of a huge investment by Boeing, which has a 787 aircraft manufacturing plant in the city and employs about 7,500 people in South Carolina, most in North Charleston.

In a separate case in South Carolina, a white police officer who shot a 68-year-old black man to death last year in his driveway was charged Tuesday with a felony: discharging a gun into an occupied vehicle.

A prosecutor previously tried to indict North Augusta officer Justin Craven on a manslaughter charge in the February 2014 death of Ernest Satterwhite. But a grand jury instead chose misconduct in office, which is a far lesser charge.

Craven chased Satterwhite for 9 miles beyond city limits to the man's driveway in Edgefield County. After Satterwhite parked, the officer repeatedly fired through the driver-side door, prosecutors said. The 25-year-old officer faces up to 10 years in prison if convicted of the gun charge.